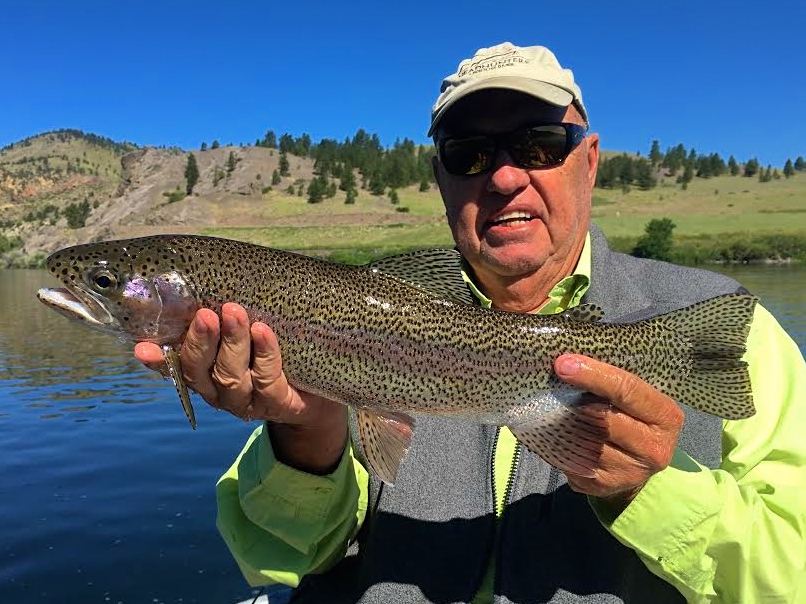 Coming at you live from the banks of the Missouri River this wonderful sunny Monday morning in late June from Dry Fly HQ @ Headhunters Fly Shop in downtown Craig Montana.

All things are good here on the Mighty Mo. Water levels are falling still and we should see totally wadeable conditions very soon. But, this wade anglers have plenty of side and back channels to access as I see them hooked up often. The dry fly anglers, wade dudes, are enjoying this mid-hatch PMD action. We are too!

Mostly dry fly anglers in my boat the last couple weeks and that will continue through the remainder of June into late July. It is the peak season and anglers abound. Craig is busy, full, over-full some would say. Weekends are nut-so! Go early, or go late. If you are in the middle, you will feel it and it may not be the solace you desire on your fishing trip.

The nymphers are whacking them daily. Great nymph fishing with caddis pupa, PMD nymphs, and attractor nymphs as well. You don’t have to tie on any pink flies! Hooray. The long winter and long spring has given way to normal flies. Patterns that you love and we do too include the regular slender bodied mayfly patterns and the sometimes gaudy and colorful Caddis pupa patterns. Come by the shop and we can set you up. A picture full of the flies that work will be up on this site and the FB Page shortly.

Tips for the week ahead include…

Flows at 7560cfs currently. They will drop again. Today should bring us an update from the DNRC about the near future. But 6K is the preferred highest wade fishing flow. We will see that soon as the inflows from Canyon Ferry are 7320cfs. Look at the chart below. Falling rapidly!

Get out early or stay out late. Good dry fly bite late. Not so good int he am til the PMDs come off. But the blind fishing can be good until then. Or not. Caddis or dead caddis can get a fish to come to the surface. Lots of caddis in the air in the am. Most I’ve seen in a few years.

The caddis bite is better than I have witnessed in a few years. Not off the charts like it was until 10 years ago, but better than the recent past. I want the caddis of old back, but may be a pipe drew, Wish for higher flows and a flush. Support UMOWA for continued insect and water quality studies.

PMD fish like cripples and spinners. The spinner falls have been epic and some last for 3-5hrs. So get out there and get some. Shitty drifts repeatedly over the fish will not get it done man. A slack line dead drift is imperative. Gone are the days when a bad drift will get the fish to bite your fly. Negative reinforcement is a strong educator of all creatures in nature. The more often the trout see bad digging drift the less often they rise, the less often they eat your fly, the less often you get the net out. Honest.

BBQ tonight at Headhunters getting rilling about 4pm. Izaak’s closed on Mondays so we are going to have a bit of an event. A small one ending before dark. Gotta get some sleep as to get up early and write this blog, and then get that early launch to get those finicky Missouri River rising trout.

Jim Arkin up top with the image. Long time guests. They used to come in July, but have shifted it to this period. I like the thinking. That fish was on the first drift on an Outrigger Caddis. The fish were eating PMD spinners with reckless abandon. The easy out would be to toss the spinner at them. But a well presented caddis will sweeten the deal. Just because the majority of the bugs on the water are one thing, does not mean that is what you have to toss out there. Match the hatchers should listen up here. Think about how animals like us eat. Just because cheeseburgers will be the primary tonight at the BBQ, some will also eat a kosher dog. Sometimes dry fly guys get their head shoved way up their ass calm down  and cannot think clearly. I see it everyday. I’m not saying I don’t shove mine up in there too, but in fly fishing I think pretty clearly.

It’s the rest of life I have issues with…

Trust me, I’m a fishing guide.

Enjoy your late June bite. It is absolutely awesome fishing out there. I’m enjoying in daily!

Shop open daily before 7am and late til at least 9pm. Your entertainment, information, education, and customer service giant here on the Missouri River is Headhunters of Craig Montana.