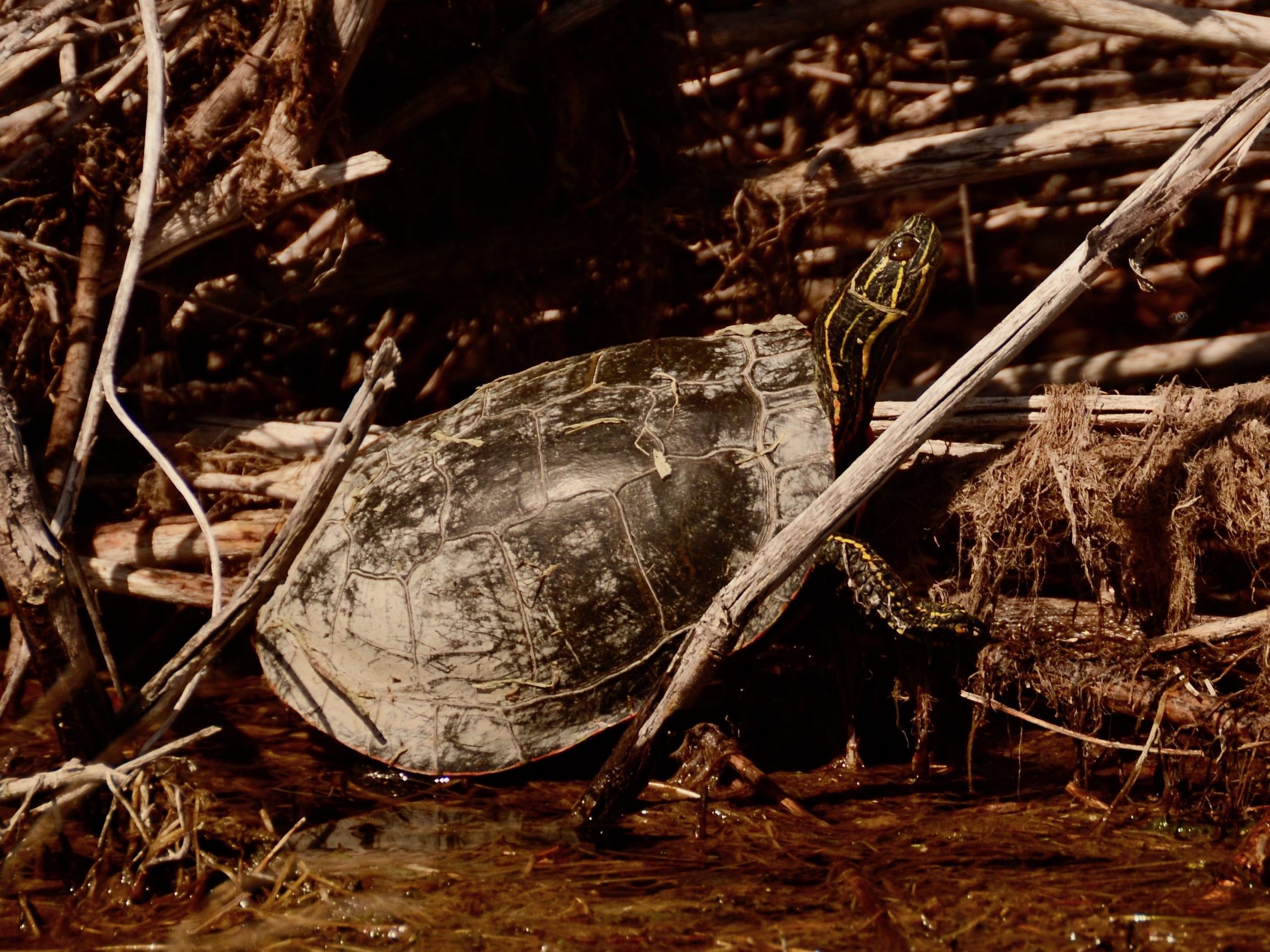 Painted Turtle on the Mo

Painted Turtle on the Mo

Saw this feller on the river today Thursday. He had a few friends around him as well.

Love seeing the wildlife on the bank of the Mighty Mo. You gotta look away from your fly for a bit.

Try it. You may see turtles?

The painted turtle (Chrysemys picta) is the most widespread native turtle of North America. It lives in slow-moving fresh waters, from southern Canada to northern Mexico, and from the Atlantic to the Pacific. The turtle is the only species of the genus Chrysemys, which is part of the pond turtle family Emydidae. Fossils show that the painted turtle existed 15 million years ago. Four regionally based subspecies (the eastern, midland, southern, and western) evolved during the last ice age.

The adult painted turtle female is 10–25 cm (4–10 in) long; the male is smaller. The turtle’s top shell is dark and smooth, without a ridge. Its skin is olive to black with red, orange, or yellow stripes on its extremities. The subspecies can be distinguished by their shells: the eastern has straight-aligned top shell segments; the midland has a large gray mark on the bottom shell; the southern has a red line on the top shell; the western has a red pattern on the bottom shell.

The turtle eats aquatic vegetation, algae, and small water creatures including insects, crustaceans, and fish. Although they are frequently consumed as eggs or hatchlings by rodents, canines, and snakes, the adult turtles’ hard shells protect them from most predators. Reliant on warmth from its surroundings, the painted turtle is active only during the day when it basks for hours on logs or rocks. During winter, the turtle hibernates, usually in the mud at the bottom of water bodies. The turtles mate in spring and autumn. Females dig nests on land and lay eggs between late spring and mid-summer. Hatched turtles grow until sexual maturity: 2–9 years for males, 6–16 for females.

In the traditional tales of Algonquian tribes, the colorful turtle played the part of a trickster. In modern times, four U.S. states have named the painted turtle their official reptile. While habitat loss and road killings have reduced the turtle’s population, its ability to live in human-disturbed settings has helped it remain the most abundant turtle in North America. Adults in the wild can live for more than 55 years.