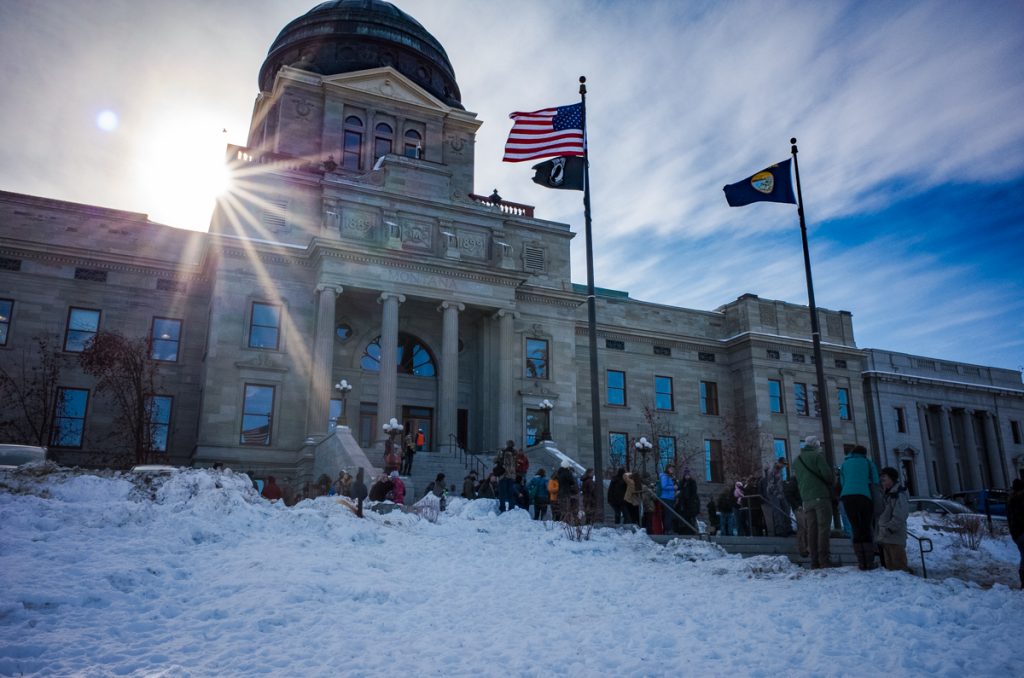 GROUNDHOG DAY Another Montana Legislative session, another attack on our public lands, and another Public Lands Rally at our Capitol in Helena. Members of team Headhunters were in attendance, along with a thousand-plus hikers, hunters, boaters, climbers, skiers, birdwatchers, wildflower fanatics, nudists, photographers, biologists, park rangers, environmentalists, politicians, business owners and others who know the value of Montana’s greatest resource: Public Lands. 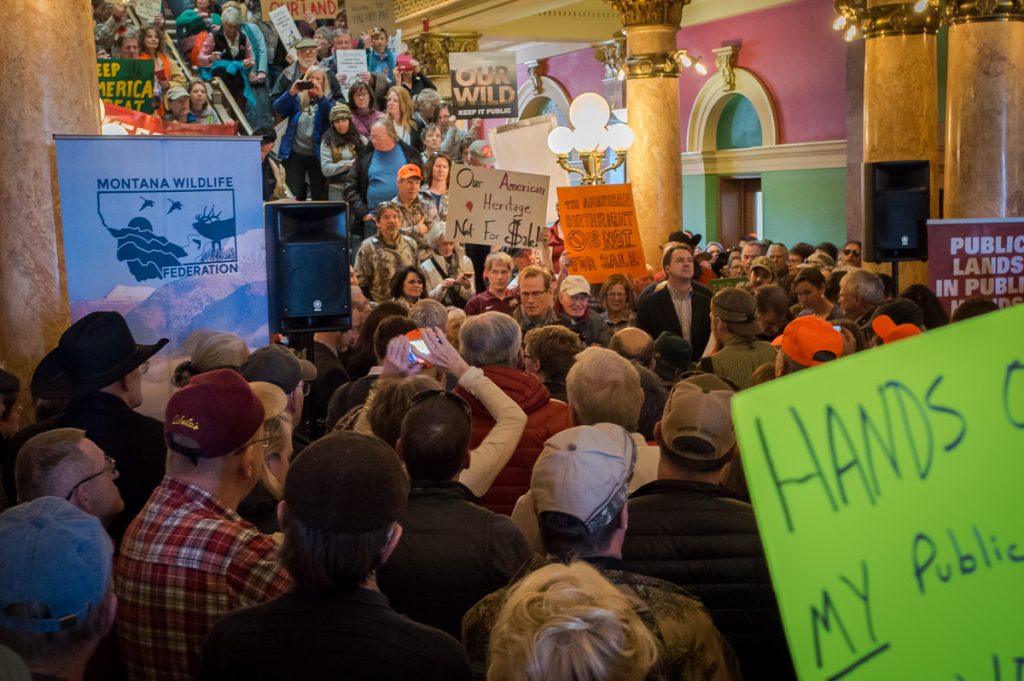 Speeches by Montana resident mountaineer Conrad Anker (above), fly fishing personality Hilary Hutcheson, KC Walsh from Simms Fishing Products, and Governor Steve Bullock got the standing room only crowd fired up. Governor Bullock has a gift for public speaking Montana style, and the roof of the rotunda was shaking after his address. A surprise speech was given by Senator Jon Tester who screamed his support via cellphone held up to the microphone. Bullock and Tester can yell, and I like that. All of Montana was represented in the room, and many folks traveled from communities in the far east and west via bus. Unlike the last “Keep it Public” rally I attended, there were no “bad guys” (land transfer proponents) in the room. As there’s only a handful that don’t hold a political office, that’s no surprise.

This is an incredibly important issue to Montanan’s, and we at Headhunters are no different. If you’re a Montana native, you probably have stayed here because of the great recreational opportunities available on public lands. If you’ve moved here from somewhere else, it likely wasn’t a big paycheck that drew you here. Next time you’re in a bar, restaurant, gas station or grocery store, listen to folks. Odds are good they’re sharing stories about a hunt in the Highwoods, a float trip on the Blackfoot, riding snow machines in Lincoln, or hiking the Bob Marshall. It’s not about you’re career, it’s about what you do, and in Montana it’s probably outdoors.

In light of the recent election, the battle to keep Federal lands Federal has ramped up. Those who seek to transfer ownership to the states – and eventually private ownership – have gained political power locally and nationally. Although their constituents continue to let them know – by a wide margin – that these lands belong to all Americans and should remain that way, they continue to promote the idea that management at the local level is better. It’s not, and would be financially impossible with the vast tracts of land in the Western US. More importantly, those lands have been set aside for ours and future generations.

And while many make complicated financial arguments for and against transfer (mostly against), to us it’s simpler than that. If Montana’s and it’s visitors didn’t have access to public lands – or those lands were improperly managed – what would be left? It’s hard to imagine Bozeman and not think of Yellowstone NP, the Bridgers and Hyalite Canyon. And what would Kalispell/Whitefish/Columbia Falls be like without Glacier National Park, the Bob Marshall Wilderness and the wild Swan River. How about the Bitteroot Valley without the Bitteroots? No more canoe or hunting trips through the Missouri Breaks? Folks in Choteau, Augusta and Dupuyer identify themselves with the massive and federally owned Front Range, not I-15. The Pioneer, Snowcrest, Tobacco Root, Ruby, Gravelly, Madison, Little and Big Belt Ranges are all places I’ve recreated and shared stories and memories with my wife, friends and now my daughter. And I still have a big to-do list. Think about Montana without all of these Federally owned lands. What’s left?

If you care about access to properly managed public lands, join this fight. Call or write your legislator and let them know that Federally owned lands are not negotiable. When you vote make sure you know where the candidates stand on this issue. Out west we often live within site of these lands, but you own them as much as we do, no matter where in the US you reside. You’re a Public Land Owner, and should support the groups that are working hard to prevent Federal Land Transfer, and keep the issue at the top of the list at a time when the list is long.

And remember when you walk through the door of our fly shop – or another – that the folks working inside have chosen a lifestyle that reflects their love of public land and recreation, and likely sacrificed a more lucrative career path to live that lifestyle. Respect.