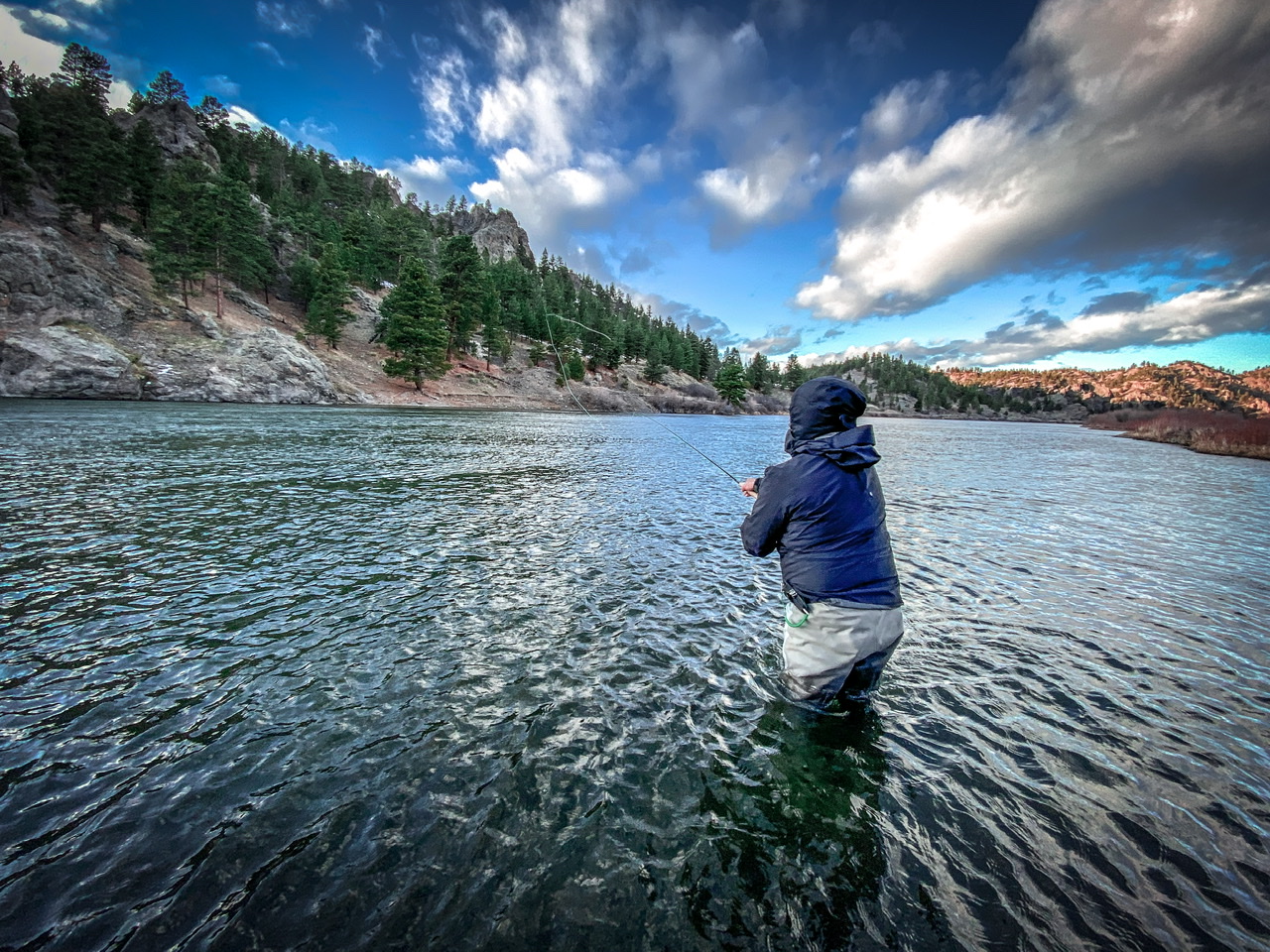 So we’ve now had a week straight of solid swing fishing And the river seems to have stabilized.  It’s still high for this time of year at 4600cfs, but it has stayed there for the last several days. Water temps are hovering around 36°. Sounds cold, but the trout seem too like it a lot. A lot.

As the water cools, the fish are starting to stack up in the tanks. This makes targeting them pretty easy with sink tips and leech patterns or other small streamers. If you can figure out that 3-6 foot deep slow moving water you should be into fish all day.

Shallow soft flats are also holding fish, and in the afternoons you’ll spot occasional risers on these. There’s been some pretty good midge activity. You won’t want a deep sink tip here, but if you have a quiet Scandi rig you can really do well in the skinny stuff.

I’ve been fishing a two-fly rig for the most part. On the front, I’m using a bugger or leech tied to 2X tippet. Productive flies include the Thin Mint, Beth’s Britches, Black Pig Pen Leech, STS Bugger, etc. I’ve been preferring a non-beaded bugger, but the Gold-beaded Thin Mint has been coming on strong.

You could end things right there and catch enough fish, but trailing your bugger with either a small minnow pattern or a large soft hackle will get plenty of attention. I’ve been using a zonker, the smallest Clouser’s I can find, Flash Fry patterns, etc. A large Black Sparrow is also a great call. Play around with it. 2 or 3X to that back fly.

The fish are aggressive enough right now that you can use both Scandi and Skagit lines. I’ve been fishing Skagit heads with 8’ SA Float/type 6 tips for the best success. The iMow 5X5 is also a good choice. I’ve never felt like I needed more. Remeber, I am using unweighted or very lightly weighted flies in true Skagit fashion. If you are using a heavily weighted fly, you can and should use less tip.

Scandi lines with an intermediate poly-leader are arguably more productive right now. They allow you to fish shallow flats that can be crawling with fish in the afternoon, and it’s a bit easier for most casters to throw it farther. That can make a difference on some of the huge flats I’ve been fishing.

While guiding, I’ve been carrying rods rigged for both and switching accordingly. Most angler are rolling one rod, which is fine. If you only have a Skagit system, I would strongly encourage you to pick up an iMOW straight intermediate tip if you don’t already have one. If you’re a Scandi dude, I’d invest in a SA Sonar sinking leader in the 3ips range, just to help in those deeper tanks.

In terms of where, Holter Dam to the Dearborn has been excellent, so I haven’t felt the need to go farther downstream. The Dearborn is covered in ice, and will be pumping in some colder water. the days are short so doing the Canyon becomes a long float, as does Pelican to Cascade. If I did go downstream, I’d probably be trying some larger gaudy Streamer patterns.

Fishing is really good right now. Some days on some floats in pretty incredible. The weather is always a key factor this time of year. Beth Langell and myself have been guiding and are around right now if you’re interested in a guided spey trip. Whitney Gould is chasing Steelhead somewhere but should be back soon and available.