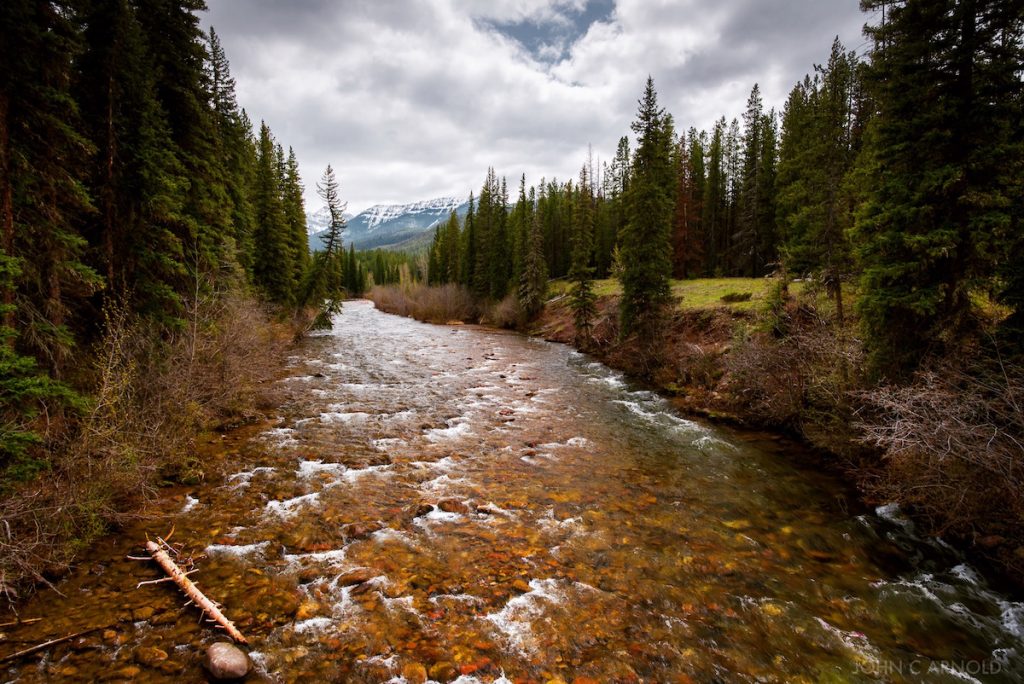 By the way… the Creeks are Open

Montana’s “small stream opener” falls on the 3rd Saturday in May each year. That was last Saturday, and we always hold the Craig Caddis Festival on the opener. Rain pretty much swamped most folks creek plans last weekend, but now that the smaller freestones in the area are open, it’s time to keep an eye on the USGS Guages. As a general rule, rising is bad and dropping is good. You’ll need to know a little bit about each stream to know if the flow numbers (CFS) are good or bad, but that info is generally not hard to get.

The Dearborn and Little Prickly Pear are the most popular small streams locally. Both produce good fishing, and because Missouri River lunkers have access to these creeks, you may run into some unusually large fish. Whats the secret? The first guy to present a fly to them wins. Both of these streams are important spawning tributaries for Missouri River trout (Little Prickly Pear is most important), and you may run into some late spawners if you’re stomping around them in the next week or two. Leave them alone!

West of town there are a multitude of small streams that form the headwaters of the Blackfoot (the mainstream Blackfoot is open year around). I won’t call out any in particular, but they all hold Cutts and the occasional Rainbow, Browns and Bull Trout. Remember that targeting Bull Trout is illegal, even if you’re making the next great YouTube movie. Our advice is to drive around the area, look at the water (clear but high last time we looked), and find the calmest water to fish. Most of these creeks do not have a USGS station but you can get an idea by watching the Blackfoot gauge.

Closer to home but still to the West are the streams that make up the Sun River drainage. Access isn’t the best but most of these streams hold fish and many have some nice Brown Trout. A really easy spot to start exploring is below Gibson Dam a few miles west of Augusta. The fishing here can be inconsistent, but when it’s on it’s worth it. Beyond that you’ll need to figure it out yourself. Take advantage of Montana’s incredible stream access law to fish some of the smaller streams in this incredibly beautiful area.

(the above image is the South Fork of the Sun River near Benchmark. Not the greatest fishery in the area, and it requires some hiking. The scenery is, obviously, spectacular.)

East of town offers good fishing, but you’ll need to do some driving. Although most folks think of multi-day floats when they think of the Smith River, but there are a few wade fishing access points above and below the Canyon. Headwater creeks around White Sulphur Springs all hold fish, but have very limited and sometimes physically difficult access. Beyond that are Belt Creek and the Judith River flowing from the Little Belt Mountains. Accessed through Great Falls, fishing the Little Belts is more of a multi-day proposition. Bring your Gazetteer, camping gear and make sure you have decent tires. I have found that landowners in the area are pretty easy about fishing if you ask nicely and with respect.

To our North there is very limited fly fishing. If you knock on the right door along the Teton River you might find some great fishing, but there are miles of less than stellar habitat as well. North of Choteau there are a few creeks worth exploring on both sides of the Blackfeet Reservation boundary, but few do with so many high quality lakes in the area.

To our immediate south is the aforementioned Little Prickly Pear and a few creeks in the Helena Valley, mostly fished by locals. After that you’ll run into the Boulder drainage which can definitely be worth exploring. By now you’re getting close to the legendary streams of Southwest Montana, so I’ll leave it there.

In reality, it will probably be 2-4 weeks before many of these streams are fishing well. Keep these areas in mind, however, as they offer solitude that can no longer be found on the big rivers during summer, and they can be full of surprise fish if you do your homework and beat some brush.

Speaking of beating the brush, we recommend that you care a canister of Bear Spray if you’re fishing west of Craig on either side of the Continental Divide. Small streams can be a horrible place to run into a Grizzly Bear, and obsessed fly fishermen are famous for focusing more on the stream than on the surroundings. You can purchase Bear Spray at Scheels in Great Falls, and it can usually be found in small towns like Choteau, Augusta and Lincoln.