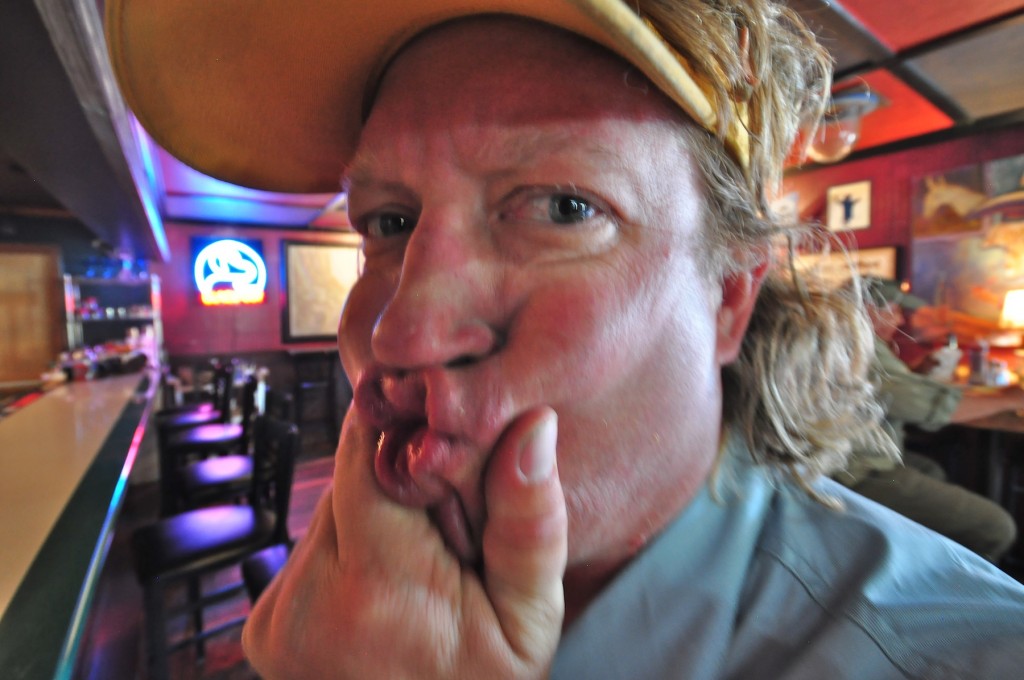 A Big One Got Away | Bob Glassen

I was beat.  I’d been in the water at first light, hunting heads as the tiny trico duns came off.  Even if I didn’t get many, it was worth it just to escape the August heat and be there as the river came alive.

About 10ish Trico spinners hit the water and I got into a few with a drowned trico beneath a buzz ball.  No wind. No clouds.  And, good Lord, it was hot.  So, I got off the water mid-afternoon.

The sun was blazing as I trudged back along the dusty trail… my mind wandered.  What would it be like to be a fish, nibbling tricos with your buddies?  Was I hallucinating in the heat?  Maybe.

Soon I was standing outside Headhunters with Squeeky.   Sara and Julie were inside behind the counter and Ben was helping a customer round out his fly boxes.   Squeeky was firing up the grill in anticipation of the Saturday anglers filtering off the river and heading over for a dog.

We were nibbling nacho cheese Doritos, washing them down with cold beer.  I remember that well.  I was telling Squeeky about fishing the drowned spinner under the buzz ball.

As soon as I mentioned “buzz ball”, Squeeky got that wistful look in his eyes, and I knew he was thinking about numbers of fish that only a guide ever sees and, no doubt, the pigs that got away when his clients’ hands froze on their reels and the tippet snapped.

He peered out from under his visor at a small dust devil skimming along through the lot across the street and, without looking, popped another Dorito in his mouth.

All of a sudden, he got a surprised look on his face and screamed, “Damn!”  With that he bolted for the street, jumping high for the blue sky. Jump, jump, jump again – straight up.  Way, way up, shaking his head back and forth, cursing and screaming – “Son of a bitch!  Ahhh…. Ahhh…  Mutha…  Ahh… Ahhhh….”

I saw his visor spin off and he was silhouetted against the blue sky frozen in time with his hair flying, feet kicking, arms waving… Three more of those crazy jumps and he hit the ground and shot away like a scalded coyote heading straight for Joe’s Bar across the street.

He was running like I’ve never seen a man run, kicking up dust, screaming and bounding along.   But he was slowing down and, short of Joe’s door; he seemed to run out of gas.   Something unseen seemed to hold him back and he stood there a moment panting.

Then he bolted back across the street heading for Izaak’s Restaurant and almost made it through the door.  Instead, he jumped onto their deck and then under the fence and then ran back up the ramp and jumped back off the deck, all the while screaming and cursing, and shaking his head.

Blond hair flying in the wind, he bolted back towards Joe’s and, whatever was holding him back seemed to pop.

With that he lurched past me and I saw a small cut on his lip – a trickle of blood dripping down his chin.  He ran into the shop and hid behind the counter.

I didn’t believe that it’d really happened.  But, there was Squeeky’s visor in the road.   A guide’s rig rattled past, the boat trailer’s wheel rolling over it.  Another dust devil spun through the lot.

Whoa… I took another pull on my beer.

Several Doritos had fallen on the top of the Yeti cooler and I reached for the biggest one.  But something made me look twice.

The damn thing was moving… all the others were sitting still, but the biggest one was moving ever so slightly… and it was pale yellow, not nacho-orange.

What the hell?   I pulled my hand back and went into the shop to see how Squeeky was doing.

A Big One Got Away