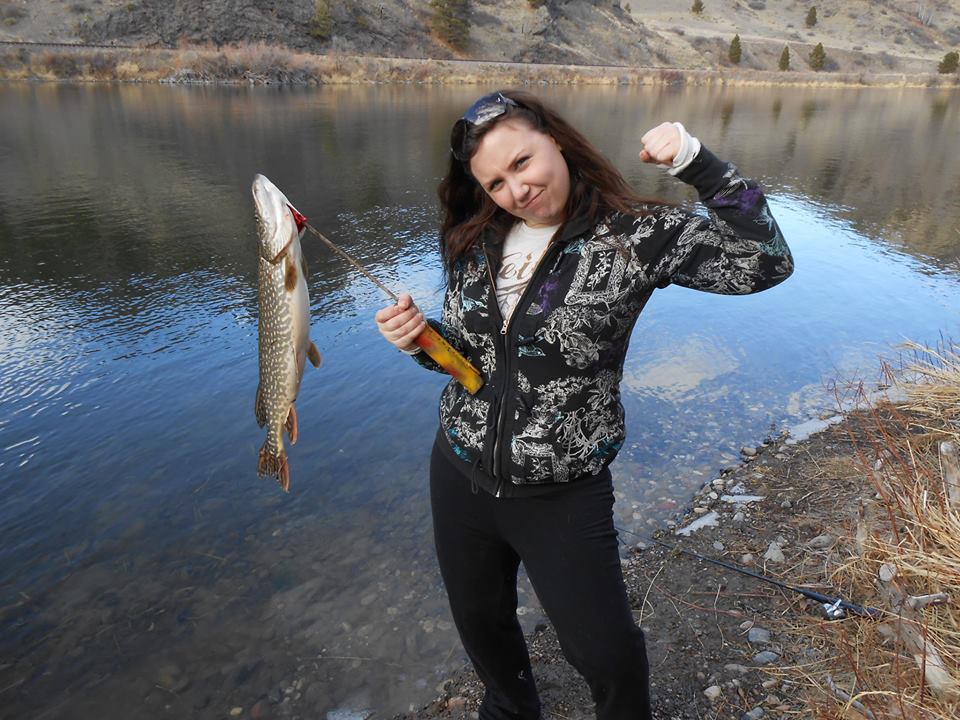 An interesting photo came to us through our Facebook page this morning. Alexandra Amundson sent us a few pictures for our “Girl’s Rule, Boy’s Drool” photo contest. Interesting, because one was of a Northern Pike. It was caught at one of our new rental properties, the “Jumping Rainbow” which is in the Canyon near exit 244. It appears that the fish in question is no longer with us. Fish Taco’s.

I have seen 1 pike caught in the Missouri River, not too far from that spot. It was a 10 pounder caught by some high school kids on a Mepps spinner. Cooper Bridge. That was about 10 years ago.

Two or three years ago, our buddy Duke Fisher sent us a shot of one that was caught immediately below Holter Dam by a member of the Walleye crowd.

Those are the only two that I know of. I have asked more than one member of MT FWP, and they claim to have never shocked one on the Holter – Cascade stretch, nor to have seen one or had one reported to them (which you should if you catch one).

You shouldn’t get too excited about a Pike in the Mo’. They live upstream and down, and it’s only a matter of time before we have a few around Craig. There isn’t much you can do about it. Mostly, we’re curious. We spend a lot of time throwing streamers in the river and never see them. But obviously, they are there.

So, our question for Headhunters Nation… have you caught or seen a Pike caught in the Missouri River between Holter Dam and Cascade? If so, when, where and did you kill it.

Let us know in the comments below…