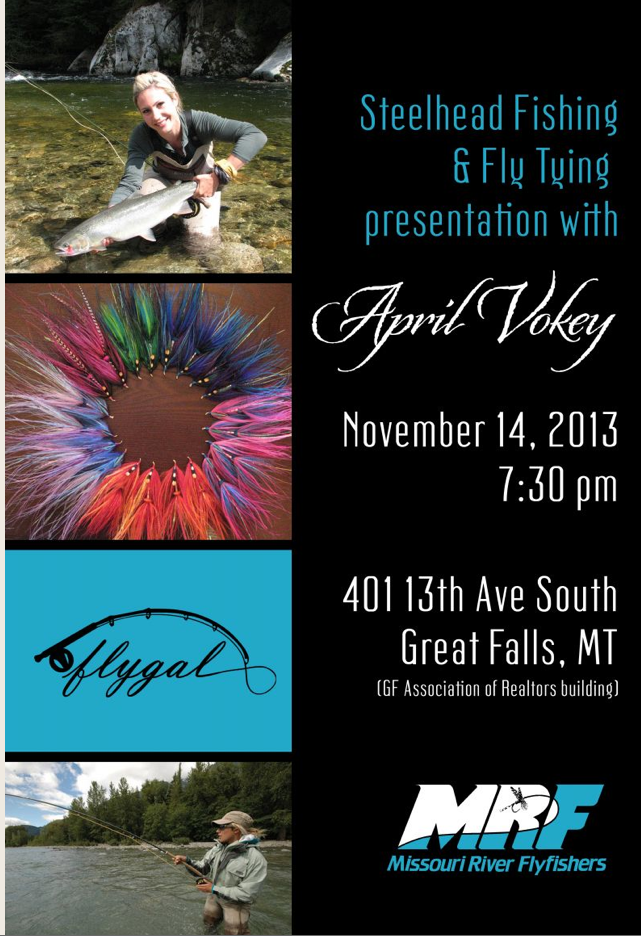 Missouri River Flyfishers is pleased to welcome our November genreal meeting guest speaker and fly tier, April Vokey of Fly Gal Ventures.  April will be speaking on fly fishing for steelhead and will have fly tying presentation at our November 14th meeting at 7:30 pm at theGreat Falls Real Estate Assocation office at 401 13th Ave. South.

April Vokey lives in British Columbia and is an avid angler and steelhead, salmon and trout guide. She was born with an unexplainable passion for fishing and an even greater passion for the BC Rivers that surrounded her. Whether it is a small creek, a steep waterfall, or an invigorating downpour of rain, April has always been captivated by the water.

As a young girl, she coaxed her father into going fishing and by the age of 16, when she was old enough to drive, she was devoting all of her free time to her local rivers.

April began her fishing career after spending upwards of 300 days a year on the water. Working evening jobs, she was able to spend the entirety of each of her days learning how to read water while gaining further understanding of British Columbia fisheries. She fished conventional gear proudly throughout her teens, eventually applying her self-taught knowledge toward the sport of fly-fishing.

She began working for a large guiding outfit during her early 20s and soon decided that the experience she was sharing with guests could be further enhanced if she were able to break free from the “get ‘em in, get ‘em out” mentality that she saw becoming a popular trend within the guiding community. So in 2007 she founded BC-based guiding operation, Fly Gal Ventures, where she presently guides and instructs anglers on some of BC’s best steelhead destinations. Fly Gal’s trips and events can be found at www.flygal.ca.

Home is Chilliwack, BC, but her time is spent waist-deep in the waters of the Dean River and the Skeena River systems. She is inseparable from her best friend and fishing buddy, Colby, who is a half St. Bernard, half coon hound.

April is a Federation of Fly Fishers Certified Casting Instructor and fly-fishing columnist. She is the Canadian field editor for Chasing Silver magazine and her works and photos can also be found in Fly Fusion Magazine, Salmon Trout Steelheader (STS), Field and Stream, Canadian Fly Fisher, Fly Fisherman Magazine, Flyfishing and Tying Journal and several other international magazines. She is a lead angler for Fly Max Films.

Her passions include the environment, spey-casting to wild steelhead, and tying salmon/steelhead flies. She has made it her mission to encourage and introduce aspiring anglers to the sport, in hopes that it will bring them as much pleasure as it has brought her. She takes pride in being an eternal student of fly-fishing and an outspoken addition to the fly-fishing industry. She is never shy to speak her mind and is always the first to stand up for her beliefs on conservation, wild fish and life in general.