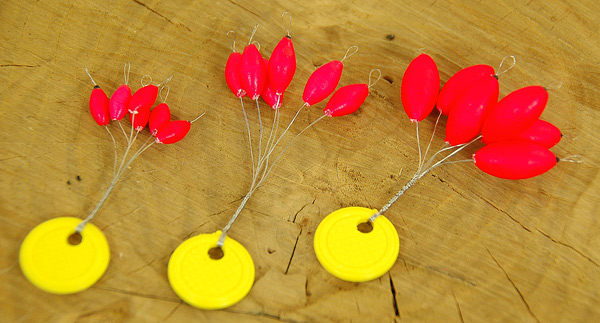 I Have an Indicator Fetish

Bob Glassen with a  great Blog today about his obsession with Indicators. We know you fellers are out there with similar issues…I may fall into this category too!

If you’ve seen me on the river, you know I spend a lot of time nymphing.  I’ll confess that I spend almost as much time thinking about indicators (sleazy “bobbers”, if the truth be told).   White ones, black ones, pink ones, Czech ones… you name it.
For a long time, I couldn’t walk into a fly shop without picking up the indicators.  Often, I took them home… and lately, I’ve been out with a French one…
A critical piece of your equipment

So, why the obsession?

A good indicator is critical to nymphing success.  Fishing the way I do, the indicator has to do four important things. 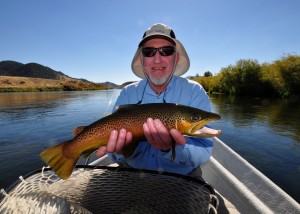 Over the years, I’ve developed some opinions about the ones I like and the ones I really don’t like.  It’s a tradeoff.  Nothing is perfect.
Here are the ones I’ve used a lot with my thoughts on their advantages and disadvantages:
•    Lightning Strike “Football” Indicators:  These are my favorite, but rigging them properly is important if you don’t want to lose one every 10 minutes.  Make sure to put the leader through the rubber tube. Then put the tube in the indicator, pinch the ends of the rubber and stretch it with both hands.  Twist it and release.  About three twists should be enough. Rigged properly, this indicator is light, casts well, floats well and holds onto tippet down to 5X.   When the leader is wet, it slips so it’s easy to adjust the depth.  Make sure that the size you use floats with the weight of the nymphs you are using.  The large size seems to work well with weight and the small size suspends one small bead head for nymphing in shallow water.

•    Yarn:  This comes down very softly and is sensitive to strikes, but it’s harder to adjust for depth and doesn’t cling to light tippet very well.   It’s also hard to cast in the wind and makes a wicked tangle if you throw a tailing loop.

Pat Dorsey at the Blue Quill Angler in Colorado has a way to rig yarn using very small orthodontist’s rubber bands.  This helps when using the yarn with fine tippet.  He roughs the yarn up with a piece of Velcro and uses the Velcro to apply Aquel.

There are also yarn (and foam) indicators that are rigged with a small “O-ring”.  These hold on fine tippet, too, but after you catch a big fish, the tippet bites into the O-ring and the rig becomes impossible to move on the tippet.

Roger Rehurek, with over 20 years’ guiding on the Bighorn, takes a tapered leader, cuts it in half and ties yarn to the tapered end with a clinch knot.  Then he takes a length of 3x or 4x and ties that to the tapered leader with a clinch knot.  This leader is very sensitive and comes down softly.  The light tippet sits at a right angle which helps the nymph(s) sink and aids in the drift.  The rig’s big disadvantage is that you can cut to go shorter, but you have to re-rig to go deeper.

•    Palsa and other stick on foam indicators:   Lots of guides in Colorado use these, but I don’t know why.   They put three or four of them on the leader about a foot apart and claim that it helps them see when they’re getting a good drift.  I don’t like them because they are almost impossible to adjust and won’t suspend most flies.

I do use them casting to head and tail (“porpoising”) trout in calm water.  The stick-ons will hold up a small bead head or emerger and makes takes easy to see.

•    Strike Putty:  To use this stuff, you form a small ball of the putty and stick it to your leader.  It’s pretty hard to re-adjust and doesn’t suspend much weight, but it does come down softly and can be used for fishing with light flies to nymphing (and emerger-eating) fish in shallow water.  But, it’s prone to flying off.

•    French Coiled Mono:  This is relatively new in the US.  The French competitive fly fishing teams use very long leaders – up to 20 feet.  They fish upstream with small nymphs that are light to medium in weight and use an indicator that is a slinky-like, tightly coiled piece of high-viz monofilament.  It’s greased and it floats.  The major advantage is that it comes down softly on the water, uncoils and stretches when the fish takes, so the trout doesn’t feel any resistance before the set.   I haven’t used this yet, but I’m carrying one to try on trout in shallow, calm water.   We’ll see…

•    Umpqua Insta-Set Form Indicators: These look great and the bright, fluorescent tubing points straight up when the drift is right.  They are easy to adjust – for about the first five times, then the tippet saws through the tubing and you can kiss that baby goodbye. 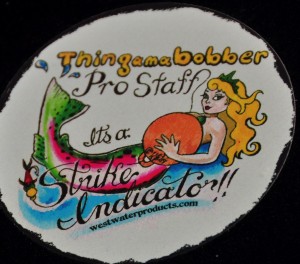 Thing-a-ma-Bobbers: These are my absolute least favorite indicator, but I think that about 90% of the fishermen I see on the Mo use them.   These direct descendants of balloons and condoms (how can you get sleazier than that?) have a lot of advantages.  In the right size, they’ll hold up an anvil and they don’t sink.  But I think that they are hard to adjust and don’t cling well to light tippet.   They’re not that easy to cast and God help you if you throw a tailing loop.  The tangles are memorable.   The larger ones also come down with a crash.   The ones that have the little plastic plug that is supposed to help hold onto fine tippet weaken the leader.  But, lots of people seem to love them – I guess they’re great for nymphing from the boat.
Keep adjusting your depth
So, there you have it.  I’m sure I dissed someone’s favorite or forgot someone else’s.  In any case, using an indicator that you can easily adjust, suspends your flies where you want them, it sensitive enough to twitch on light takes and only sinks when you have a strike is critical for nymphing success.  It’s an obsession…

Thanks Bob for your installment today. We love to indicator fish too! Although fetish, maybe going to far…