If you spend even 5 minutes a week surfing around blogs, forums, FB & Twitter, you should at least be aware that Montana and Utah continue to battle small but powerful (well funded) lobbies and individuals attempting to shutdown rivers and streams to public access.

Here at home, it’s an every two year process. Our legislature meets every other year, and various bills are sponsored by representatives who find it more lucrative to represent the special interests of a few private individuals, rather than representing their constituency who overwhelmingly support Montana’s Stream Access Law.

The battle in Montana is one of skirmishes, and it’s been going on for a long time. The battle in Utah began with a large explosion in 2010 known as HB141:

HB141, introduced late in the session, was fast-tracked through committee and used to eject HB80 from further consideration. After much wrangling, HB141 was passed. Signed into law on the last day possible by interim Gov. Herbert, HB141 (and resulting “Public Waters Access Act”) took effect May 10, 2010, effectively overturning the Supreme Court’s ruling in Conatser. – Utah Stream Access Coalition

HB141 effectively eliminated access to many of Utah’s public waterways. Places to fish.

While Montana sportsman have recently won another “skirmish” (Montana Riffraff Win Again) in the courts, recreationists from Utah are right in the middle of a decisive battle in the legislature. A compromise bill (HB37) that promotes a compromise between the rights of private landowners, and the constitutional rights of Utah sportsmen is being debated in the Utah legislature as you read this.  As is often the case these days, the “many” have to compromise for the “few”.

There is a rally today at the Capitol to show support for HB37. Good luck warriors! And here’s a passionate video that came to my attention on the Gink and Gasoline Blog:

And while conservations groups, anglers, fly shops, bloggers and guides are banding together to fight the good fight in Montana and Utah, I ironically see this photo in a publication this week. 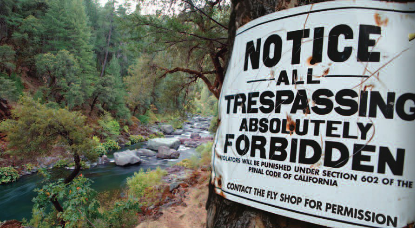