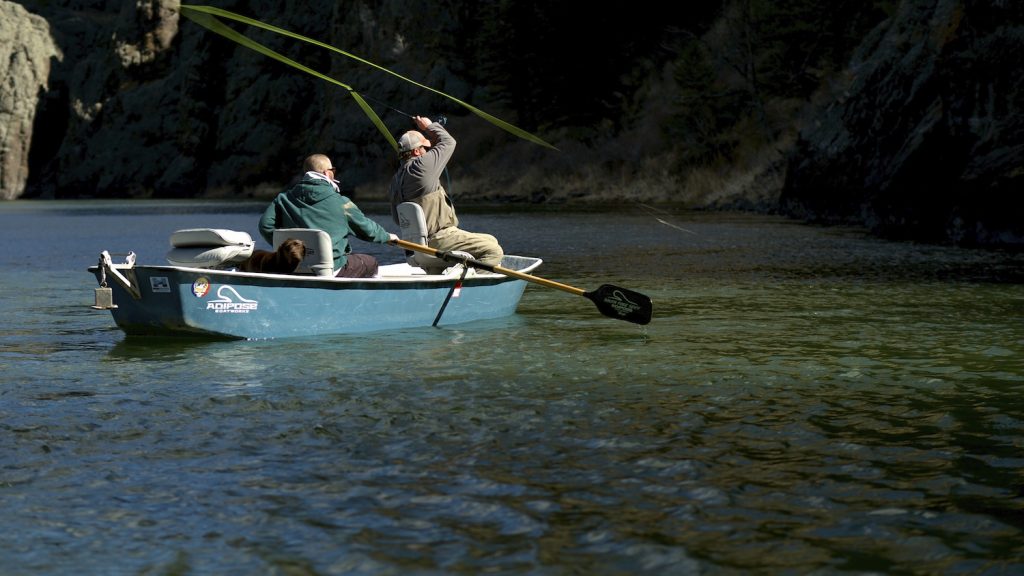 Spring is not coming. It’s here. Though I’m certain we will still see a few wet & heavy blizzards in the next 2 months, you can see by the forecast that both air and water temperatures are ahead of where they should be.

Julie and I were out working on the yard the other day. In March.

And the early spring will make for some early changes to the fishing. We’ve already spotted a few Skwala’s, and a few fish have been caught on the dry. A few.Depends on the day and where you go. And how you fish.

March is typically full of indicators and pink flies. That stuff will still work, but during a warm spring like this one, you’re going to have options:

Yes you can fish the Skwala, though our hatch is not like the legendary emergences west of the divide. But still, you will catch some fish on foamy’s if you stick with it.

I don’t always believe they are eating it for a Skwala. Missouri River trout like to rise, and as long as one is looking up you have a shot. And who cares anyhow? Catching fish on big dries in March is a luxury for us.

We’ve been swinging streamers on two-handers for months, but during late-winter we seem to do a little better from the boat. The fish are starting to move from the deep holes, and you’ll find fish that are “new” to a bank. And those kind of fish are dumb.

A floater or intermediate tip will work, but we recommend a heavier tip until later in the spring. We like the Airflow Streamer Max a lot, and it’s designed to be cut back a bit if it’s fishing too deep.

A floater will work, however. Just depends on where and how. In the above picture of Pete and Jared I took the other day, Pete is throwing a big streamer tight to the bank on a floating Wulff Ambush line. He nailed a big Brown right after this pic.

We’ve been hearing all kinds of great lake fishing reports, from the Blackfeet Reservation to Perch on Holter. There are big Pike at the head of Canyon Gerry. Just about everything is open so you have plenty of options available.

While I’m not a big lake guy, this is a great time of year to catch a big trout in the shallows. Willow Creek, Nilan and Bynum Reservoir near Augusta are all solid bets. Calling FWP in Great Falls will get you some detailed info on what size of fish are in which lakes.

And if you (or a buddy) has a Walleye boat, it’s an excellent time to go fill a stringer with fish taco fixin’s.

Many smaller streams are tempting right now, but make sure and check the regulations to see if it’s open. For instance, the Dearborn River is CLOSED RIGHT NOW! But I know that I will see folks fishing it under the I-15 bridge almost every week until the opener on May 16.

Odds are pretty good that if it’s too small for a drift boat, it’s closed. But check regardless. Some small creeks are open, and sections of larger rivers may be closed right now.