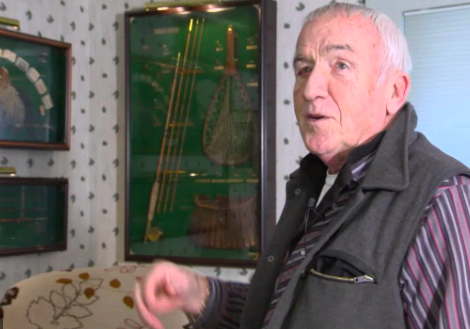 I had the privilege of fishing with John a few times over the last twenty years. There is only one John Foust.

Met John and Elna when I worked for the Trout Shop Cafe in the late 90’s. One of the many trout fishing characters you meet living in a trout town. But as many of you know there aren’t many like John.

I guided with John a few times in the early 2000’s. Had a great time. The one day I remember most my boat caught more than his boat did as we pulled in for lunch. John didn’t like that. HE does not like getting out-fished. He’s got some fight in him. So this young buck, Squeeky, was not supposed to out guide him. The salty legend.

But after he let that go, 5 grumpy lunch minutes, he was interested in understanding the methods I was employing, what flies we were tossing, type of water. Always ready to learn was John.

You remember people like John and his wife Elna. Characters for sure. Truly fishy as John guided some of his guests on the Missouri River for a generation or two. When he wasn’t guiding or fixing something he and Elna were out fishing the Mo. And they fished a bundle.

Always trying, tweaking, working on some sort of pattern on the river and on the vise. And always excited about it. He was eager to show you his patterns, share ideas sun info, all along spinning some sort of dirty joke.

An accomplished tier John had a business Foust Fly Fishing dealing with tools, materials and the like.

He is famous and legendary for a number of reasons including being credited with inventing the Freddie fly pattern. A fluffy foamier sort of thing that has tricked more trout in Montana than there are residents.

It was created with either Freddie in the boat or on his mind. Freddie Foss was the feller it was named after. Both John Arnold and I guided Freddie and guest a number of years ago.

The particular day I guided Freddie was one of the anglers in the boat. His guest? John Foust. Boy did I have a great time with the two. John had been guiding Freddie for years too many to count and Mr. Foss felt it time to fish with John instead of have Mr. Foust guide him.

What a treat. John sat in the back of the boat and told stories for all but 15 minutes of the day. I kept bothering John to fish. He kept saying he would when it felt right.

He tied on a big giant Freddie. The Freddie has that furry foam so it traps lots of air underneath. And then gets wet and wafts around triggering voracious takes from totally stunned trout. I mentioned to John that he would have a better chance if he tied on an Adams or anything else as we were fishing in October.

I know he knew that, but you can’t stop guiding even if you are guiding a fishing guide. He generously and kindly nodded as he was tying his size 6 Freddie.

It took almost 15 minutes for John to catch one. A good one. A brown trout. The fish simply came up and sucked under the oversized Freddie like he was daintily taking a Trico spinner from the surface.

John waited for a couple seconds and set firmly. “Got ’em” he said. “I knew he’d eat that. Brown trout like the Freddie.”

John released the fish. Freddie congratulated him. Both men smiled.

And that was the feeling I always had when encountering John and Elna. A happy one. One of camaraderie, fly fishing brotherhood, of laughter.

A sad day as we lose John Foust to the fly fishing heavens. Many have been changed in some sort of way by knowing John. Their path altered. Whatever your engagement with John was, we all can say that when we walked away, we smiled. Stuffed fuller of life!

Thanks for contributing to my life John. If we can do anything to memorialize your fly fishing life we as anglers can pay it forward. Your humor, your enthusiasm, a twist of the devil, and your passion for the sport and our rivers. It’s the least we can do John.

I can’t wait to tie on my fruit Freddie of the season. I’ll think of you John and smile.