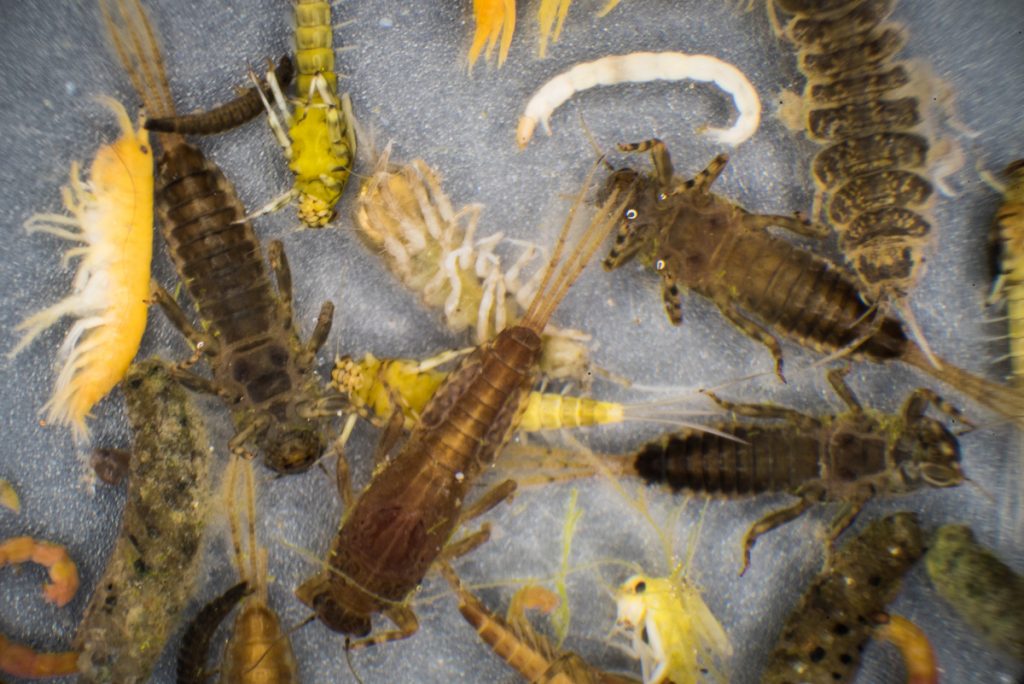 The following are some pictures of bugs from the Missouri River that were collected in June a couple miles upstream of Craig. These images will hopefully aid in your fly design and/or fly selection while you are fishing this month. Although all these images are of nymphs/larvae, PMDs and caddis are currently hatching. 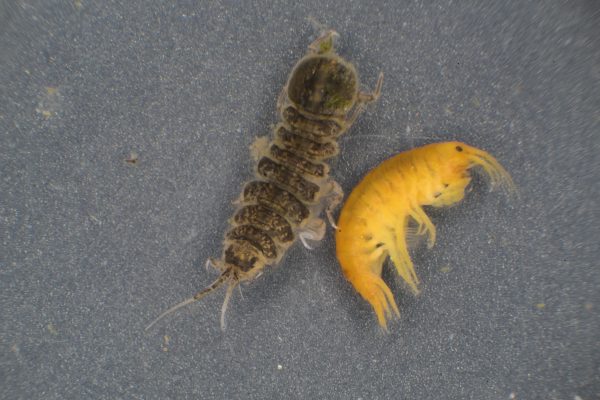 These bugs are commonly available throughout the year (the one on the left is a sowbug and the one on the right is a scud. The Rainbow Czech Nymph (Headhunter’s #1 selling fly) and Arnold’s Sili Scud are great scud imitations. A lot of guides will always use the Rainbow Czech as their lead fly since a scud is a big meal that trout are used to eating all year long. A sowbug imitation such as the Tailwater Sow Bug or a Ray Charles is another great option to fish any time between hatches or when you can’t figure out what’s going on. It’s worth mentioning that the scud turned orange when it was preserved for these photos. In life, they are an olive/gray color, but orange imitations work too. 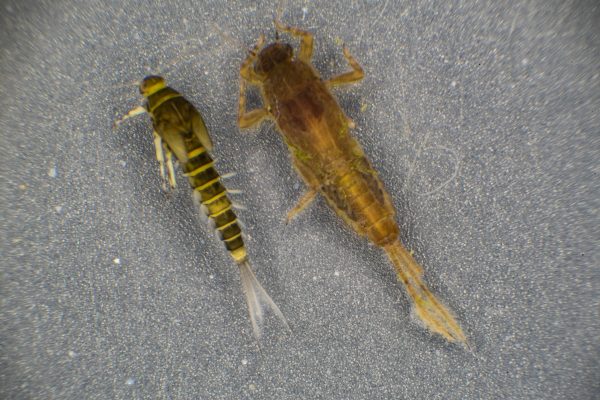 The most abundant bug collected in the sample was PMD nymphs (the one on the right). There were also a decent number of blue-wing olive nymphs (the one on the left). PMD nymphs are bigger than blue-wing nymphs. During early June, the PMDs are a #14 or #16. Don’t be afraid to fish a bigger Pheasant Tail style nymph this month. Flies like the Little Green Machine imitate either of these species exceptionally well. 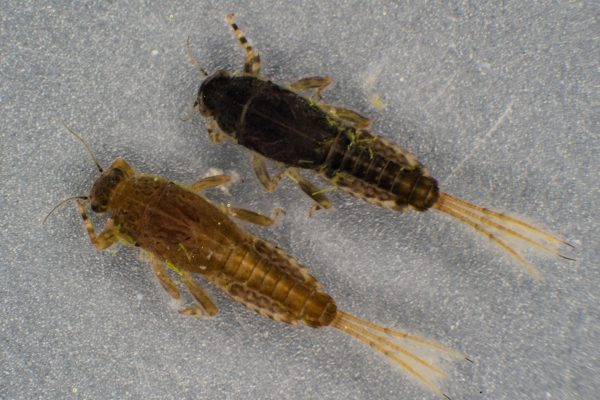 PMDs occur in a variety of different color schemes. Both bugs below are the same species although they are colored differently. If you look at the PMD bins in the shop, you’ll notice the same thing. PMD imitations range in color from honey-blonde to dark-brown.The Light and Dark Peep Shows are a great example of this. How do you determine which color to use? Try whichever variation you prefer first, if it isn’t working that well, try a fly colored the other way. 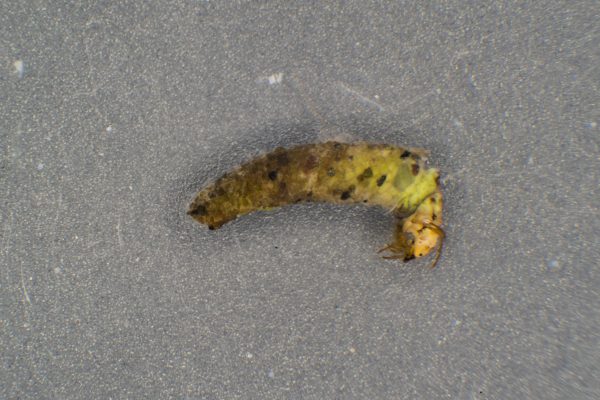 If you flip over some rocks, you’ll notice that there are a lot of small cased caddis. These bugs are long-horned sedge larvae. They live in small tubes constructed from bits of rocks. Although the larva is a pale green color, the trout are used to eating the entire cases, so dark, horn shaped flies like Bloom’s Weight Fly or the Grape Slushy are great imitations. This particular species (Oecetis avara) will begin to emerge mid-July but the larvae are available to the trout all summer. 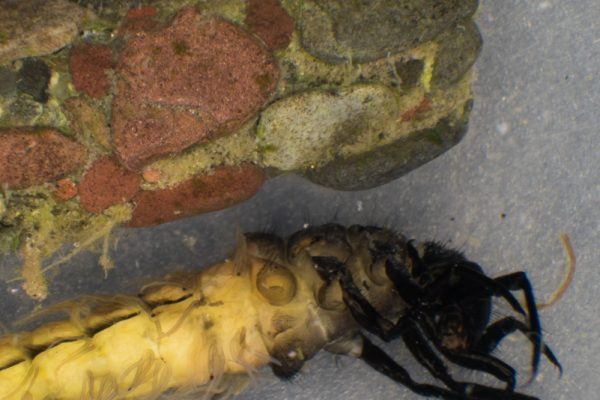 In addition to the smaller cased caddis, quite a few October Caddis nymphs were collected. The large stone case of these bugs is an inch long. Unlike the smaller caddis, these larvae are less important as a food source because of their stone armor until they begin to emerge from their cases in the fall. However, there is evidence that the larvae may leave their cases to enter the drift. In his book Caddisflies, Gary Lafontaine said:

In June and July they drift quite readily. Amazingly this is one of those case makers that abandons its case, possibly to build another, and slips into the current. Unlike stonefly nymphs ,or free-living caddisfly larvae, which exhibit a higher rate of behavioral drift at night, the drift phenomenon for the uncased larvae happens in the daytime. The peak is connected with water temperature and occurs at approximately 4 P.M.

I haven’t personally witnessed this phenomenon, but like most things Lafontaine wrote, it’s worth thinking about. 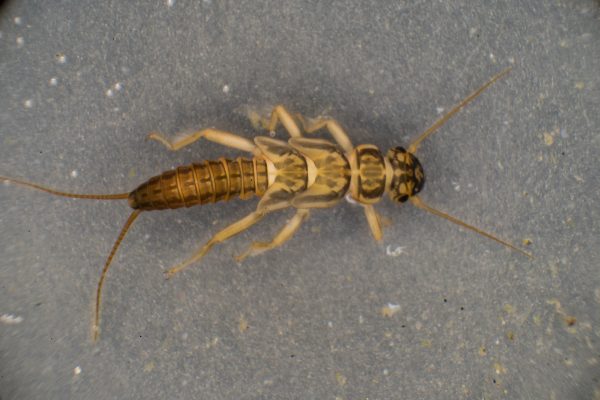 This is the time of year when Yellow Sally Nymphs are abundant although they are often underrepresented in most angler’s fly boxes. These stonefly nymphs are about a #12 or #14 so their imitations overlap pretty well with those of large PMDs. If you get in a tough spot, it would definitely be worth giving one of these patterns a try. 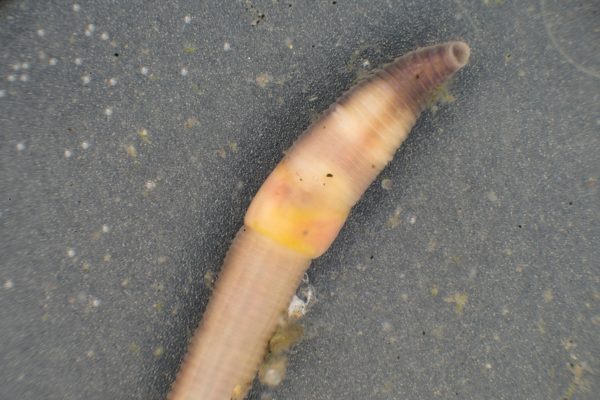 A lot of anglers who come into the shop assume that San Juan Worms imitate terrestrial earthworms. They do, but they also imitate aquatic worms that are always present in the river bottom. These worms are often swept into the drift during periods of high flow, so imitations are particularly effective following rain events or when the flow is increased at the dam. When the river was raised to 7000 cfs a couple weeks ago, Wire Worms and Ninch’s Fish Finder Worm started to work exceptionally well. Heavy worm patterns such as these are a great change-up from the usual Czech Nymph as a lead fly. 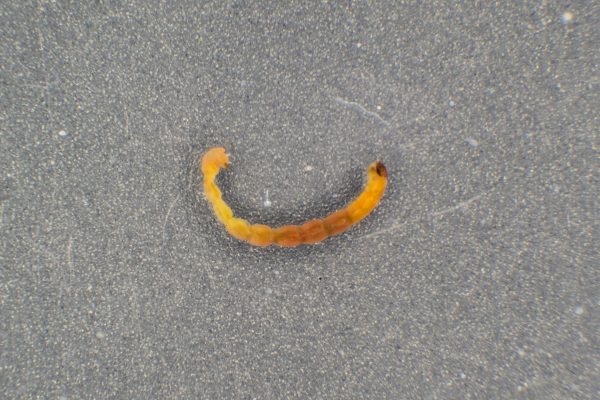 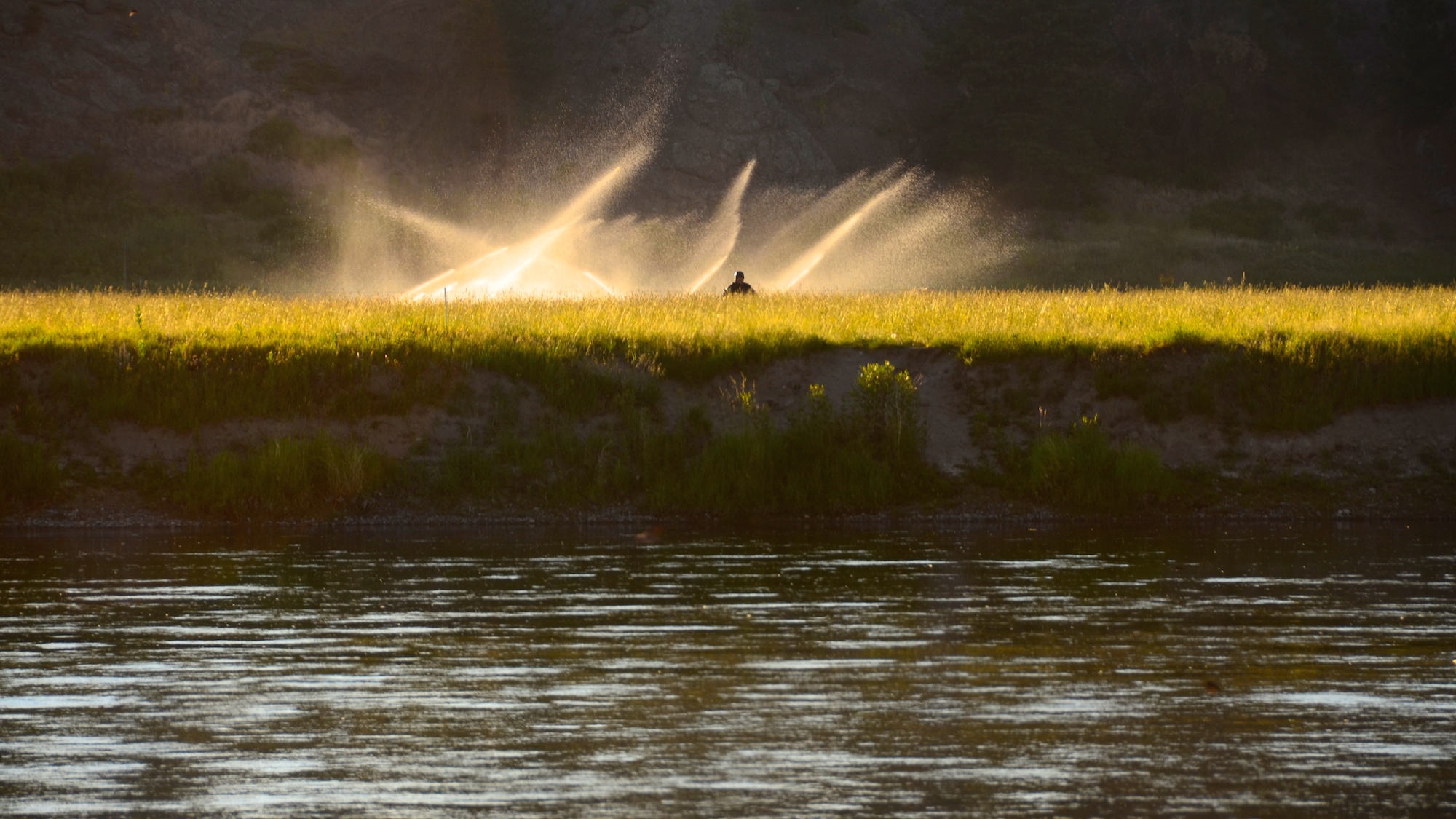 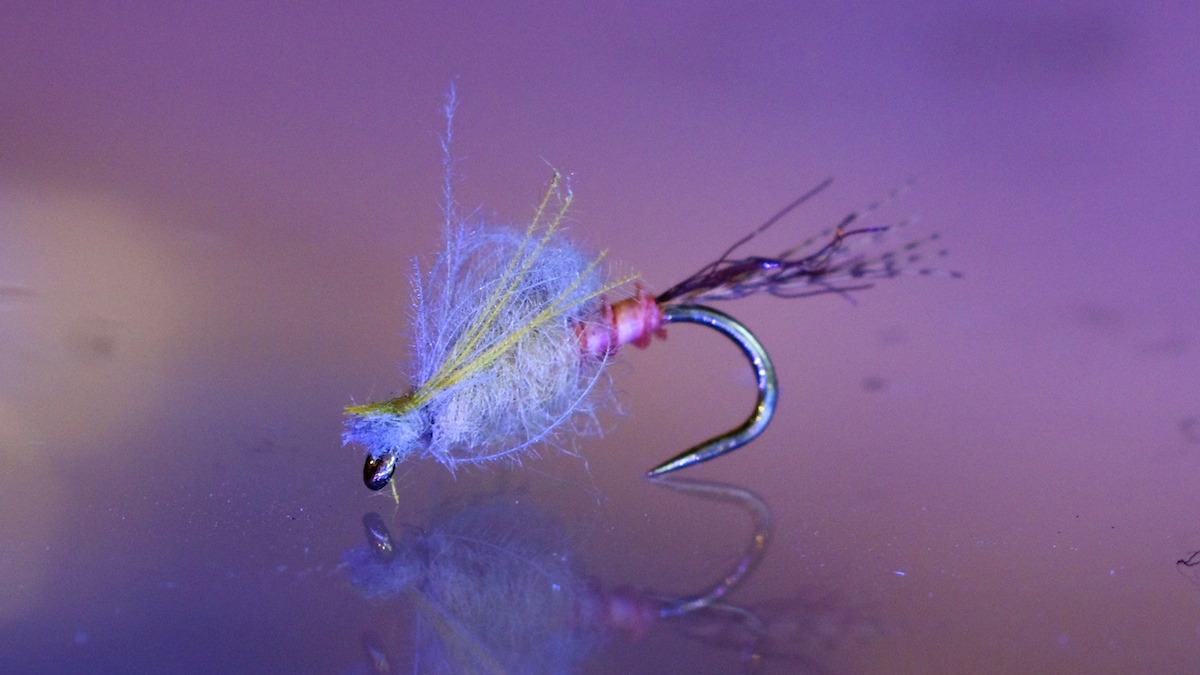 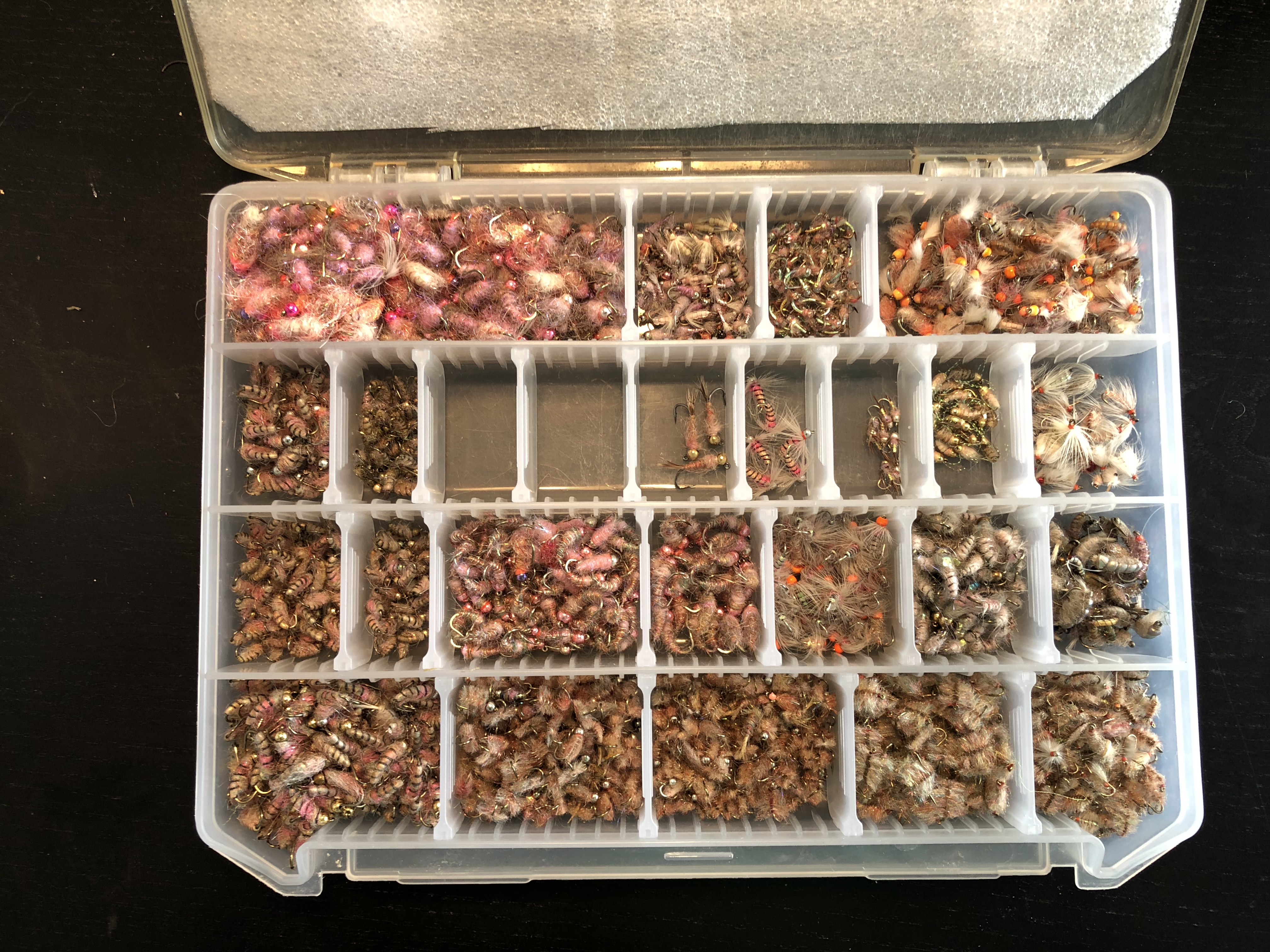