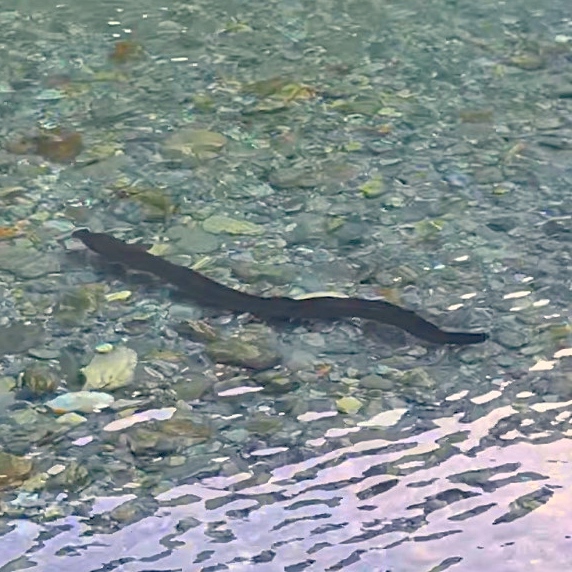 Max checks in from New Zealand where he and fellow HH guide Brett Matula are fishing their way around that fishy country. Max on his first visit with Brett making his second journey across the pond. Enjoy the eel story below and check out the blog Brett penned outlining his fishing walkabout.

A few days ago I caught an eel on a fly. I was sight fishing a gravel flat for trout on a large lake when he came in and I thought, “what the heck”. The approach and the eat felt a lot like carping. I threw my fly a few feet in front of the approaching fish, let it hit the bottom and twitched it twice in the mud. He turned and moved on the fly, I saw him shake his head, so I stripped hard to set the hook. The fact that he ate the fly at all surprised me enough that I hadn’t yet thought about what I would do once I hooked him, so what happened next was kind of a blur.

Rather than swimming every which way like most fish do, he just rolled and thrashed around, throwing his tail up the line and sliding it down to point at which he was hooked. It was obviously his first time being caught, and it was strange to fight a fish that was not afraid of being caught, but angry about it in an aggressive, predatory way, like he wanted to kick the shit out of whatever was attacking him. Kind of the same way some large pike react to being hooked*. He pulled hard, but he didn’t run for cover. I think he wanted blood.

When I landed him I pulled him onto the bank by grabbing the line and after a few awkward attempts finally got my hemos on the bend of the hook and using gravity as resistance was able to pull it free.

To my surprise, he did not need my help to get back to the water. Instead of flopping around on shore like a trout, he laid flat on his belly, and slowly slithered like a snake the two meters or so back into the lake from where he came. Perhaps it was not his first time being out of water. That image has been stuck in my mind ever since.

I still wanted to continue fishing (for trout) but I had to re-rig, because my tippet was covered in thick eel slime. I cut it about 18” above the fly, and tied on another Thin Mint streamer, then waded back out to my spot.

Only minutes later, in came another, larger eel. I instinctively threw a cast in his direction which I immediately regretted because I didn’t really want to catch another. I pulled my fly out of the water, but it was too late as I had already lured him in, and now he was swimming towards my bare feet. So I started slowly back peddling away from the pursuing fish, but the commotion of my feet splashing in the shallow water only drew him in faster. Now he was in hot pursuit and I was being chased back to shore.

It seemed so karmic that only minutes after surprising myself by catching one of these things in the first place, that the next one to come along would have me running back to safety like a scared little kid.

It was fun to be creeped out by a fish, and for the first time in a very long time, I felt like a kid again.

I felt like I so often did as a kid when I encountered a new species. I remember how I felt when I caught my first ratfish off the coast of Vancouver Island (google ratfish). That feeling you get when you catch a fish that you don’t really want to touch. There will always be something mysterious and spooky about fish that live in dark waters.

But these eels don’t just live in big dark lakes; they also inhabit the gin clear trout streams. Sometimes you think you’ve spotted a big brown holding tight to the bottom, but then realize it’s an eel. These eels prey on small and medium-sized trout and will attack even large trout. We had one try to get at a four pound rainbow in the net, that we had to scare off before releasing the fish for fear that the eel would kill the vulnerable trout.

I had heard about eels in New Zealand before, and had heard that I would probably encounter some. Little did I know how close I would actually get to one. It was an interesting encounter to say the least, and I feel grateful for what will most likely be a once-in-a-lifetime experience.

*If you think pike are slimy, try messing around with an eel. This fish was ballpark 36” and six or seven pounds, and used every bit of its length and size to fight the line. The slime left on the bottom three feet of my tippet was so thick that I could not remove it, and thus could not salvage the entire leader. Using my index finger and thumb, I slid the slime down the line until it coagulated at the bottom foot or so, in a thick gelatinous mess. I’ve heard these things are really good eating, and thought briefly about filleting and frying it up, but at the moment just didn’t want to deal with the thing.