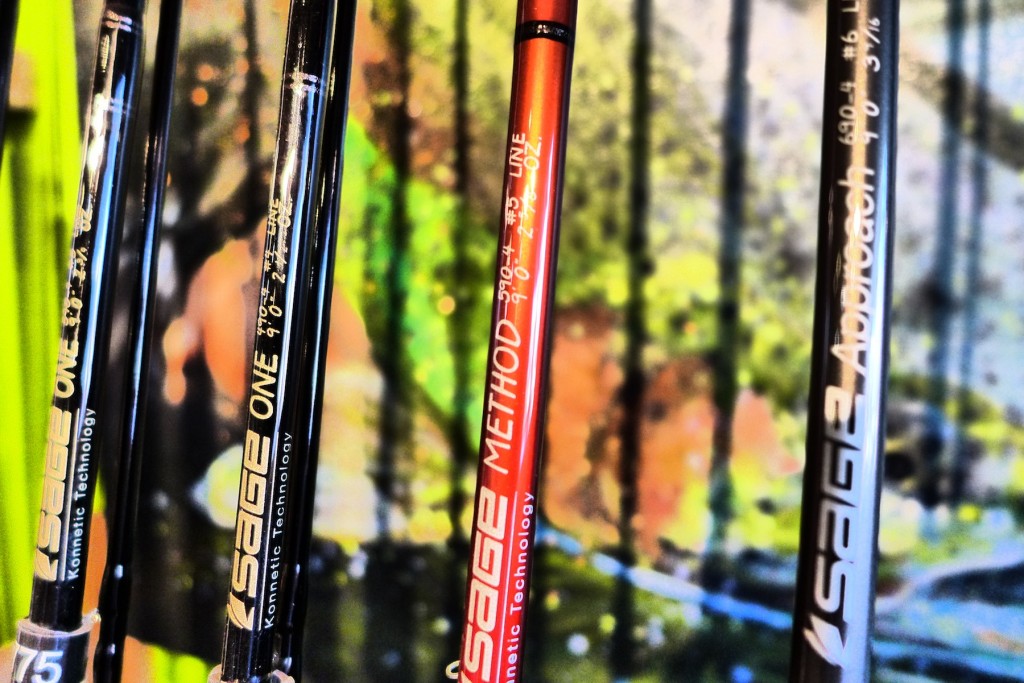 I have a few of them. The SAGE Method. I used to be, as many of you know, a soft rod guy.

What I have learned, albeit slowly, that tip flexing stiffer fly rods are made for more than just softly putting the sneak on sipping trout…with-out the nasty wind in your face.

It is just that simple. I love a Winston IM6, but not good for 20mph and tossing heavy nymph rigs. Or chucking articulated streamers against the bank. It is not good for either of those tasks. No, not good.

If you are the type, and many of you are, to have a quiver full of rods at your disposal, then those niche rods are perfect. Like having a stable of vehicles. A couple sports cars, a Cadilac, a work truck, an RV all parked in your driveway. Specific tools for specific situations. But, but what if you want an everything rod. An Everyday Driver?

I pose the question, as I asked myself this fall, is the SAGE Method an everyday driver?

If you know a little something about SAGE fly rod history you know that it is the latest rod in a line of hyper-fast action fly rods, originally penned for expert anglers who desire a lightweight tip flexing pole with a focus on accuracy. Remember the SAGE TCR? The Technical Casting Rod for expert casters? I do. I have one. A 5 weight. I currently have  it lined with a 7wt. RIO Outbound Short. That particular line is nearly 2 line weights heavier than a normal 7wt. Yah, so an 8 1/2wt for a 5 weight TCR. Clients love it. They can hammer a nymph to a trout or toss a Volkswagon sized Grasshopper to the shore.

But not practical for everyday use with a 5wt. line attached. I was in a casting clinic years ago with Jason Borger when the TCR debuted. After the clinic I was speaking with Jason and asked him what fly line he was using. He told me, “Not a 5 weight fly line. I’ve got an 8 weight head on this 6 weight running line…”

Yah, not for the common man. Not an everyday driver. The sweet spot was so small that very few could actually find it. Americans need a rod for the everyday guy. A rod that can load at a few rates of speed. That we can feel, understand, learn.

SAGE stated at the release…

“We created the Technical Casting Rod (TCR) Series rods to push the boundaries of fast-action tapers and high line speed, while maintaining the all-important fishability. To be clear, these rods are not for the casual angler. The TCR Series is designed for skilled casters facing the most demanding conditions-where technical precision, distance and the ability to cut through wind are at a premium. Try a TCR -we think you’ll be amazed.”

Then the TCX arrived on the market.

Again, more from SAGE on the TCX release…

The new Sage TCX Rods are much different critters than the rods from which they evolved. Yes, they are powerful and can boom out as much line as you can handle, but they’re noticeably lighter and much more responsive in hand. Sage G5 Technology, with its amazing success in the Sage Z-Axis and Xi2 Saltwater Series, gives the TCX the ability to load at virtually all distances and requires less effort to cast in the process. Yet, the TCX will generate blazing line speeds with just a couple of quick strokes! The result is a very powerful, ultra-fast action fly rod that is friendly to intermediate casters, as well as experts, and performs in a much wider range of fishing conditions utilizing overhead, roll, and single handed spey casts. So, if you’re seeking the ultimate fishing tool for reaching the far side of the river, accuracy in strong winds, and propelling big, bulky flies, you just found your Nirvana; the new Sage TCX Fly Fishing Rods. Oh, and if you’re still looking for a rod that will outcast all others in the parking lot, the TCX will do that, too! So, now you CAN have it all; unbridled power coupled with G5 sensitivity makes the Sage TCX a fishing rod first, and a casting rod second to none!

The TCX had a far greater and welcoming reception than the TCR. You could and can cast the TCX with a fly line near the rod weight. The manufacturers recommondation worked well on these rods. We see a lot of these around the Missouri RIver. Much more than the predecessor.

The TCX was made with the common, modern man in mind. Most every body could fish and cast this rod with success. Without the feeling of failure. The TCR was aptly titled a Technical Casting Rod. It just happened that there are not too many Technically proficient casters. It maligned many a caster…many.

The official literature above, to be fair to SAGE, states that these rods were not built for the common man…they were built for casters beyond the novice level. I understand that.

Scumliner had a few of these jewels and still does. The 2 handed versions were very popular amongst the Steelhead gang, and we witnessed the SAGE TCX gracing our drift boats ofter here on the Missouri River. Headhunters Guide Ben Hardy is also a big fan. Have they moved forward to the Method yet? No. The TCX is a fine rod. But, it too yesterdays news.

Coming on strong and included in modern rod discussions is the SAGE Method. Trout, salt, and 2 Handed versions are all popular. And became that way immediately upon release. The buzz was pretty loud…

Generally that means nothing in the trout world. The NRX got good press, and we know what has happened to that rod. While nice, no staying power like its most famous family member, the GLX. In line for a couple decades.

The SAGE Method is one terrific rod. I have a few SAGE One boat rods that the customers have become fond of. Until the red rod made its debut.

Then, as I had a 5 and 6 weight in the boat I began to put them into customers hands. Not mentioning to the guest it was the top-O-the line ultra quick experts rod.

Do you know what happened? Can you guess?

Yah, they worked well and my guests loved them. Did the guests, which represented all skill sets from novice to expert, notice anything? Would they notice that in their hands, they held the worlds foremost fast action rod?

I know for a genuine fact that the TCR, and for some the TCX,  would not have produced the same results. No, clearly not.

So, does that make this Red Rod an everyday driver? Not entirely. Not for everybody.

Does it feel good all day long and does it stand up to the pressures of wind, casting streamer flies, and fighting the behemoths of the Missouri River?

Yes, yes, and yes. All trials pass with flying colors. Red to be exact.

A rod that you can use everyday for dry fly fishing, for heavy nymphing, and chucking the big fly. In the 5 months I have employed the SAGE Method, it has greeted every challenge with success. A deft nympher the Method will lob like a laser split shot and bobbers to the destination. Whether it be short or long, high or low…this rod excels at the bobber tossing game.

Streamer flies? If you like a rod with power, that coveted hidden power under the hood, this is a tool for you. The 6 weight is tough enough for the big articulated gaudy patterns that some anglers use to frighten our trout. The 5 weight too. A good use of the 5 weight is chucking buggers. I would choose the 6 for obvious reasons. Plus, the 6 weight weighs in under 3 ounces. A big gun with a light handed feel!

Tough conditions here on the river, this river with the perpetual wind, make the Method shine. It is a rod that can stand up to the Missouri River winds. While the SAGE Method can perform the nymphing and streamer tasks with ease, the dry fly capabilities it possess make this rod a must for serious Missouri River anglers.

This rod has balls when you need them!

You can become a better caster if you hold the Method in your hand long enough. Just keep casting. Good things will happen. I have always said what is great about the SAGE One is that it is a rod that makes everybody a better caster. From the novice to the expert. You may not be able to say the same about the Method. It really is made for the intermediate, advanced, and better casters. It does make that class of angler better.

With the dampening qualities of today’s SAGE rods, with Konnetic Technology…it removes some of the wows, sine wave, the repetitive oscillations, reducing the amplitude of the wave therefore the fore and aft cast becomes more efficient.

Is the SAGE Method built for every angler, every type of caster, for all fly fishing conditions? Almost.

While its predecessors were sometimes difficult to live with daily, the Method is a rod that can bring you happiness most of the time. For many Missouri River anglers it can bring joy daily.

The SAGE Method. An everyday driver.