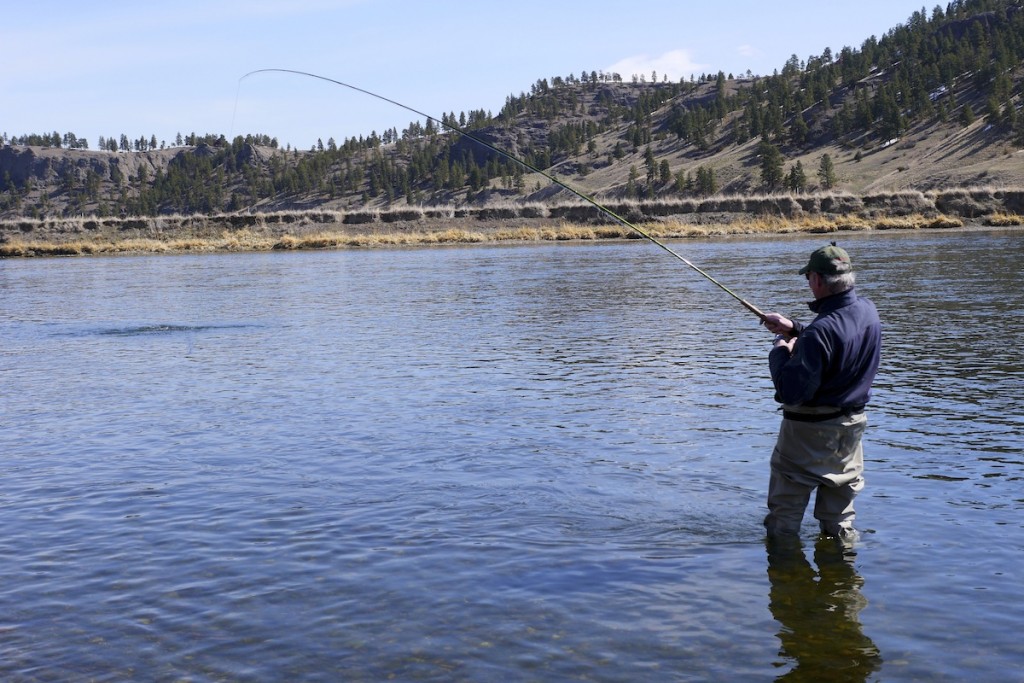 Why Spey Rods are More Effective in the Winter.

Over the last few winters, I’ve spent more time fly fishing the Mo’ with a two handed rod than with a single hander. This is especially true when it comes to streamer fishing. In fact the inconsistent and often slow winter streamer fishing is one of the reason I first played the waters around Craig with a two-hander.

Now, most of the crew at Headhunters are competent two-handed casters and anglers, and all enjoy it. That’s part of the reason that we spend much of the winter driving our cars up and down the river with long rods on the roof. And we’re not the only ones. In the 20teens, it’s not unusual to see more folks bouncing around Craig with rods over 11 feet than under. It’s very hip.

This fact was brought to my attention last weekend. I spent the day hucking streamers with a couple of extremely competent fly fisherman, both of whom are streamer junkies. Our primary goal was to get out on the water and enjoy some beautiful mid-winter weather (temps around 50). This we did. Our secondary purpose was to hammer a bunch of big fish on stripped streamers. This we did not.

Now, we didn’t get skunked. In fact, we caught a fair number of good fish. But only when concentrating in dead water using slow retrieves. We definitely had some long stretches with little action

As we were fishing, it occurred to me that we would likely catch more fish wade fishing with the same flies using a two-hander (or a single hander), fishing down and across “Steelhead” style. But why?

Probably has a lot to do with moving the fly slowly, through the slow water that fish tend to congregate in this time of year (a subject I touched on last week in a post about nymphing).

Think about it. When you’re swinging in low and slow winter currents, that fly is in front of the fish for a much longer period. They can see it, and don’t have to move to follow it. It’s conceivable that a fish could see your fly for 30 seconds or more in certain runs.

When you’re stripping sideways to the current from the boat, the trout only see it for a moment, and must move if they are interested in taking a further look. Fish holding in calm water may do this, but it is unlikely that fish holding in current will leave a holding spot in our current arctic conditions.

Simple as that. Cold water. Slow presentation. One more reason to get out on the river with your spey rod, switch rod or two-hander.