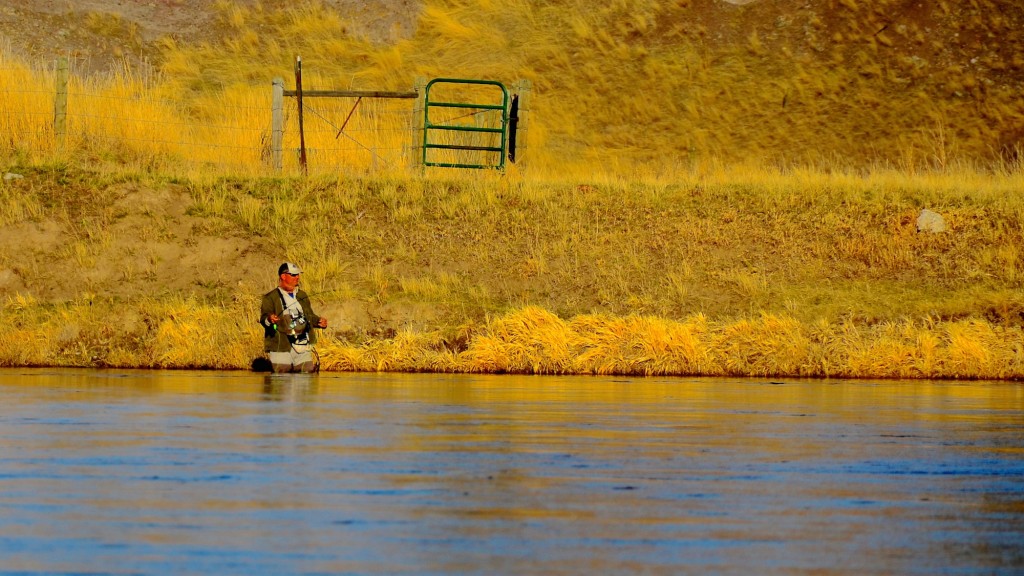 Lots of questions, calls, and folks inquiring about how to fish the rising water levels.

Generally this happens in June. It is April. No worries.

The plan is to allow the water to go through the gates to prepare for the 117% of water in the upper hills. The Rockies. The Missouri River drainage area. 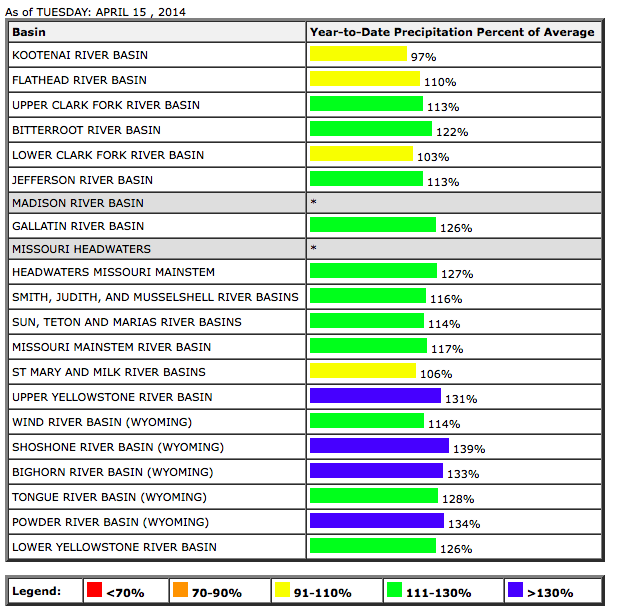 So will we have a ton of water in June? Maybe. But the water managers plan on not repeating the debacle of 2011 or 1997. If it starts raining now and does not stop until Noah arrives..then we may have a problem. Until then. We are not concerned.

The Missouri River Water Advisory Committee meeting this previous Friday outlined the probable flows for the upcoming months. They stated a probable flow of 10,000 cfs. A probable low of 8,500 cfs and a probable high of 12,500. The meeting consisted of a bundle of FWP, DNRC, BOR, PPL, and 6 public. While a couple log time local outfitters were in attendance Headhunters Fly Shop was the only fly shop in attendance at this very important Missouri River water and flow indicator meeting held annually.  At no point during the meeting did the panel suggest we would have flows over the 12,500cfs mark.

Unless it starts raining cats and dogs tomorrow and does not stop until the 4th of July. Then, we got issues.

The colder weather in December led the flow to be below average than historically measured while the warmer than normal March led us down the road of low lying snow melt and higher than normal inflows. That brings us to today April 16th.

Historically we have all the precipitation on the ground by April 15th according to Stephanie Micek of the US Bureau of Reclamation. She also stated that inflow in 1997 and 2011 we sat or above 200%. We are on the same path for those inflows to continue April thru July 2014. In an attempt to mitigate the the flows that many consider too high the USBR and PPL are attempting to release some of the water in Canyon Ferry Lake so we do not encounter another 1997 or 2011 level of flows.

She is saying they, we, you do not want flows at or above 15K. We agree Stephanie.

As many of you remember ad already know the plan yearly is to fill Canyon Ferry to full pool, 97%, in the last week of June allowing for summer flows of 4100cfs.

Looking at models from the previous 64 years the water managers devise a plan that resonates with all parties involved to achieve this optimal flow of 4100cfs.

Saturated ground water levels also mean that the need for irrigation is lessened therefor the water amount pulled from reservoirs is diminished. More water through the system. We are currently experiencing more ground saturation than the previous two years.

The Missouri River is a resilient gal. She fishes everyday. We are so fortunate to live an work on this river. Mother Mo allows us to fish non-stop while other freestone rivers experience annual run-off as they become unfishable due to clarity and color. Not so here on the Missouri.

Our local tributaries are clean and falling. Our low level snow is off the hills and we are clean. The river proper is green, greener than normal with visibility in the 3′ range. Not diminished in any manner to slow the bite.

The Dearborn is 297cfs and Little Prickly Pear is 188cfs and falling. Both on the steady downward slope. Little to no coloration change as both of these tribe can carry a bit of color. Sheep Creek is clear. Stickney Creek is running and is gin clear too.

How to Fish Rising Waters

Some days you get ’em, and other you don’t get as many. That is the theme. We are so fortunate that we are able to fish this world class resource all 12 months and while the better than average flows this April can change your style, your approach a bit…we are able to fish through these Mother Nature influenced periods.

We don’t consider this 8K mark high water. Is it higher than our historical average? Yes, but high to us means over 15K. That is considered high water. This is a seasonally adjustment to alleviate the potential of higher than average flows in June.

Fish where you used to fish, when the water was lower. Except rig deeper now. The fish may have moved inside a bit. Nymphing is the game for most. Inside with the boat. The best way to look at the run is to believe you are wade fishing it. Look upstream and cast to the soft inside seam. The soft water. Medium speed along with medium depth. Imagine the sub-surface structure and put the flies on the shelf lines.

Or watch someone catching fish and replicate their actions.

The good news for the bank addicted angler is that you can actually fish towards the bank. Find and fish the right sink tip for streamer success. Many are still fishing the softer insides for bugger brilliance, and most are still staying away from hard banks with too rapid a flow.

Fish the soft inside runs adding weight until you get near the bottom. Bobbers are good, Your choice of indicator. Just make it floaty enough to hold up the anchor attached.

Wade fishers are going to have a tough time. Safety is important and keep that in mind. Those running boats be aware of your safety gear like life jackets etc. Most of the places you step in the water @ 6K cvs the water is near the top of your waders. At 8K+? Yes, it is higher than your nipples. Be very careful as the water rises the pace is faster too.

Dry fly fishing this week? Yes. BWO’s are here. In bigger numbers as the week fades towards the weekend. Midges are coming on strong too. Be ready for them to pop in a big way…today?

Call us up on the phone if you need more info or to read our mood, or our minds. It may get you nowhere, but worth the dime for sure.

The shop is open daily with guided trips $300. We have a few openings and we would be glad to help. Lodging is also discounted for the remainder of the month as well.

Check out this video from a couple years ago. This was not shot last week. We have flows of just over 8,000 cfs. A bunch of these techniques are valid for use at current flows.

See more videos from our vast selection of Hedhunters Videos on Headhunters TV.

Crawfish Flies For the Missouri River 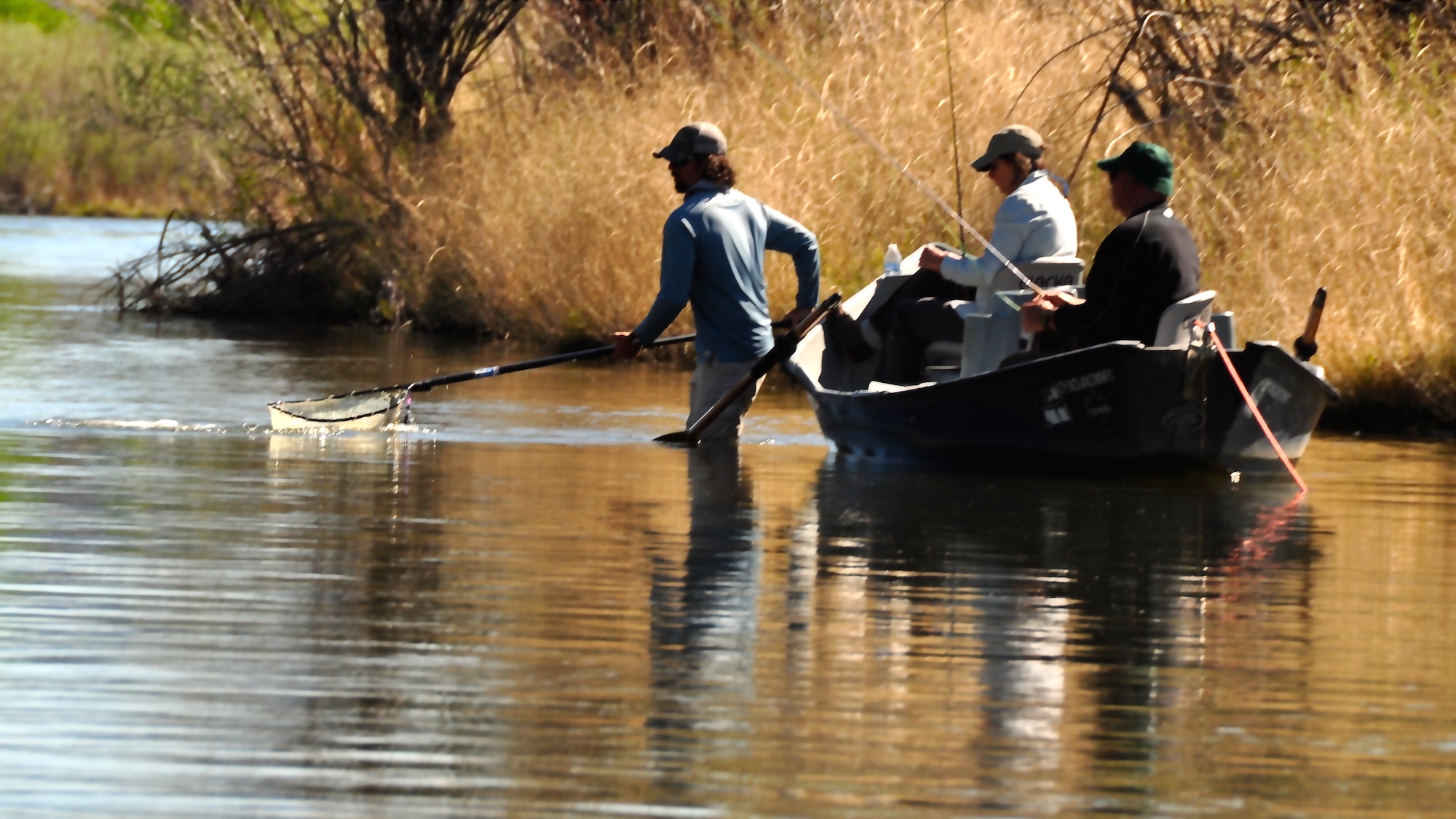 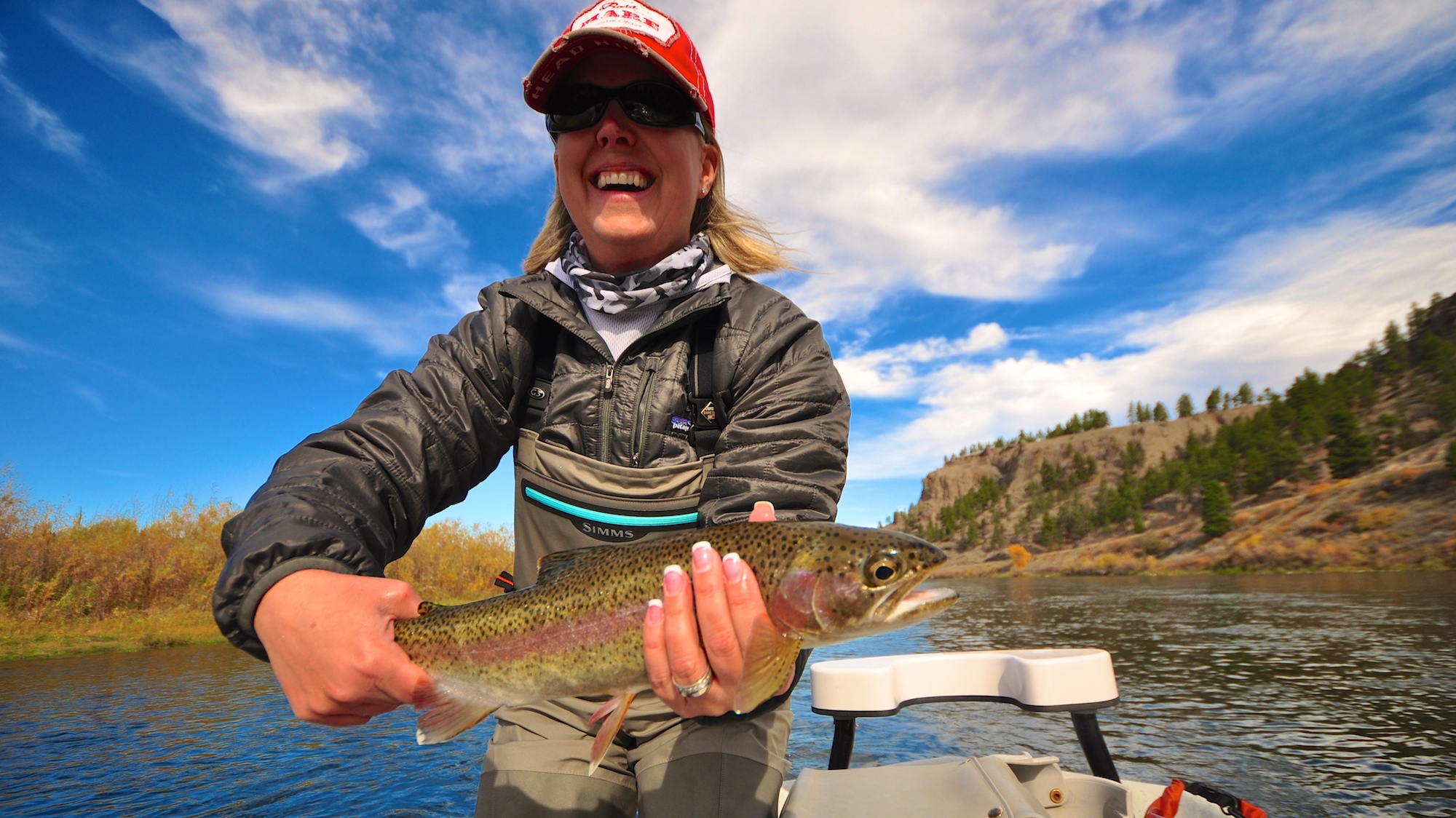