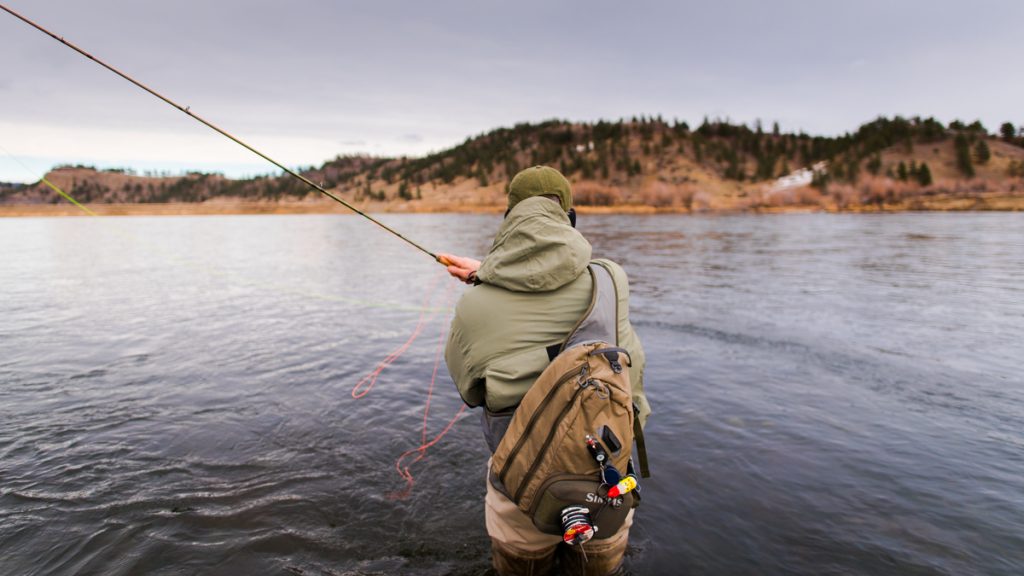 Lately I’ve seen a resurgence in the dreaded “switch” line. Particularly on newer spey rigs purchased regionally. At our last clinic there were no less than 3 new outfits present rigged with switch lines. All were recommended as part of a rod/reel/line kit from where they were purchased. All 3 left the clinic optimized for spey casting with standard Skagit or Scandi shooting heads, and happier owners.

I’ve been bashing switch lines for years, and thought I had gotten in front of the disease. Apparently it has emerged as a new strain that is more resistant to my opinion. Or maybe just more folks are buying their spey gear in the Northern Rockies, where it’s less likely you’ll run into a knowledgeable spey technician, than in, say, Portland or Seattle.

While I’ll admit that in the last 2 years I have finally seen some useable switch lines, they still represent such a huge compromise that there is no way I can recommend them, nor have I ever met an experienced caster who prefers them over Spey lines. Or even uses them.

So let’s back up quickly, and review what these lines are designed for…

The term “switch” was first applied to rods short and light enough to be used as a single hander, and long enough to be used for spey casting. Remember that at the time a 13′ #7 spey rod was considered small, so the jump down to 11 feet was drastic. The problem was that no lines existed that would perform spey casts on these new rods. And if they did, you certainly could have used those lines on your single handed 9′ 5 weight to spey cast. So really, these were just shorter spey rods, and it baffles me why they didn’t refer to them as that. By building “switch rods”, however, manufacturers unwittingly sped up the trend towards shorter and lighter two-handed rods. In fact we’ve now reached the point where the difference in length between a “switch” rod and a “spey” rod is measured in inches, not feet.

Instead of designing much needed short-head spey lines for this new category of rods, manufacturers decided to match the new lines to the term, instead of the rod and the customers demand. Also, some of the rods were “overhead” 6 weights, and some were “spey” 6 weights. So we ended up with a bunch of switch rods and switch lines that had no consistency in length, taper, or grains across the industry. Nobody had a clue how to design a line that could perform powerful spey casts and act as a traditional overhead fly line. Because it can’t really be done. More on that later.

Now 5 years ago, there were still some folks around talking “switch”. The idea that you could spey cast down through a run, then turn around and upstream fish back up in single handed fashion (with the same fly line). But those that tried quickly found out that; a) most switch lines were terrible spey lines; b) spey lines are way too heavy to single hand cast effectively, and c) throwing dry flies on a switch rod sucks.

But for each angler I talked to looking for a true switch set-up, I talked to 100 who were looking for a small spey rod. I really don’t hear the “switch” discussion anymore, although there are no doubt rivers – or more likely runs – that do benefit from the ability to do this quickly with one outfit. But like I said, you could do it with your 9′ 5 weight with the right line (Wulff Ambush). And while I do run into folks who ended up with a switch line as part of their new Spey kit, few of them asked for it. Simply a case of an uninformed salesman innocently matching up the rod, reel and line out of the catalog. In other words, if you ask for a switch rod – and don’t ask for a particular line – you may well end up with a switch line.

You’re hearing what sounds like a little fly shop criticism here. In reality, I’m pointing out the fact that we live in Montana, and nobody should expect every fly shop employee in the region (and no Big-Box) to be an authority on Spey lines. Just like you shouldn’t expect a Montana fly shop employee to be an expert at rigging billfish leaders. Or a Florida fly shop employee to know what Gink is. Many of them need a little direction from you.

Back to the Clinic…

So, back to our last clinic and 3 poorly lined rigs. The first two were matching off-brand rod,reel,line outfits. They were good rods, termed “switch”, and were lined up with very long belly “switch” lines with heads past 50 feet long. The owners said they performed flawlessly while overhead casting nymph rigs, but they couldn’t seem to spey cast them at all. No doubt. Neither could I. Felt like sewing thread. For these two I went to the other end of the spectrum and quickly rigged them both up with short Skagit heads from OPST and Airflo. Both rod owners loved them, and quickly picked up a couple of spey casts now that they could feel the line doing it’s thing. They also quickly realized that they needed two reels and lines for their rods, as they wanted to continue to use the switch line for single handed casting. An Echo Ion reel for $79 solved that problem.

They also went out and swung several nice Missouri River trout after our clinic on the Skagit head/sink-tip/streamer combo.

The second rod was the Orvis Clearwater switch with the Orvis Hydros Switch Line. I have cast this line quite a bit, and consider it one of the best of the switch lines (second to the Wulff Ambush). It is a true 50/50 compromise – unlike the above example – and performs spey casts much better with it’s shorter, heavier head. But it’s still a massive compromise. Look at it this way, it casts both spey and overhead, but it also performs both styles of casting half as well. This angler could feel what was going on better than the other two, but could not get the power to transfer from his hands to the line. This is because ALL switch lines are underlined compared to their Spey cousins (or all Spey lines are overlined). They have to be so that overhead casts can be performed.

Gary Sandstrom, designer of the Wulff Ambush lines understands this:

Typically a good starting point for switch rods is an Ambush 8 weight (290 grains) will load a 5 weight switch rod, Ambush 9 for a 6wt switch and a Ambush 10 for a 7wt switch (rated for spey application). If the rod is a true single hand, then just match the same Ambush line weight to the rod line weight.

So, Sandstrom and Wulff say +3 line sizes for Spey, and stay at recommended for traditional overhead casting and rods. Thats a massive difference in grains, and is the reason that designing a switch line that performs well in both disciplines is nearly impossible.

This angler was interested in accurate and powerful spey casting, and understood the technique. Looking around I think he quickly realized that the switch line was not going to provide the performance of a true shooting head. He asked me if he should try a Scandi head before I could even bring it up. After rigging it up, he didn’t really have to change much. His technique was already solid. If anything he powered down, as he now had a properly balanced outfit and a line he didn’t have to fight. Booming casts out there with control and ease.

Lesson: If you want to spey cast, get a Spey line.

But remember, the problem was that the right lines didn’t exist for these shorter rods. We often ended up with shooting heads a touch too long and lacking the ability to add – and turnover – a sink tip and large streamer. Finally, we are now seeing the extremely short head spey lines to match these shorter rods perfectly. These new lines are also built in ultralight weights for the new generation of “Micro” or “Ultra-light” spey rods that range from 2 to 4 weight. No line has been more popular at our shop this year than the OPST Commando Skagit heads. These have been designed from the ground up for shorter spey rods, and lengths range from 12′-18′ and 150-475grains. I would call customer satisfaction 100%, and I would include our shop staff in that. Airflow makes the Skagit Compact Switch (hate that name), which is a great line but substantially longer at 19′-20′. RIO makes the Skagit Trout Max, which is best for very short rods with it’s 11′ head length, and is only available in the lightest grain weights. These are all Skagit heads that require the addition of a tip (floating or sinking), and have the ability to fish deep and throw large-ish flies.

Now we just wait for the 18′ Scandi head I hope to see from someone this summer.

So, forget the term “switch”. Throw it away. If you’re on this site reading this post, you’re likely looking for a smaller spey rod used for Spey casting for trout and other resident fish. If so, you probably live around fisheries that you fish with a single hander and a bobber all the time. Why would you look for a spey rod to do that with?

And if you do want to roll a “switch” rig, I recommend you stick with a single handed rod, and perform single-handed spey casts with a short head line like the Wulff Ambush (18′). If you want to swing streamers on foot, and strip them from the boat, the OPST Commando is an excellent choice, and we are selling those heads for that purpose as well. None of the switch or spey lines are useable for technical dry fly fishing.

Most importantly, find a local fly shop rat who knows the spey game. And they don’t need decades of experience in the Skeena drainage to be of assistance. It means he or she has educated themselves when it comes to spey gear – in particular lines – and are enthusiastic about and practice two-handed fishing. 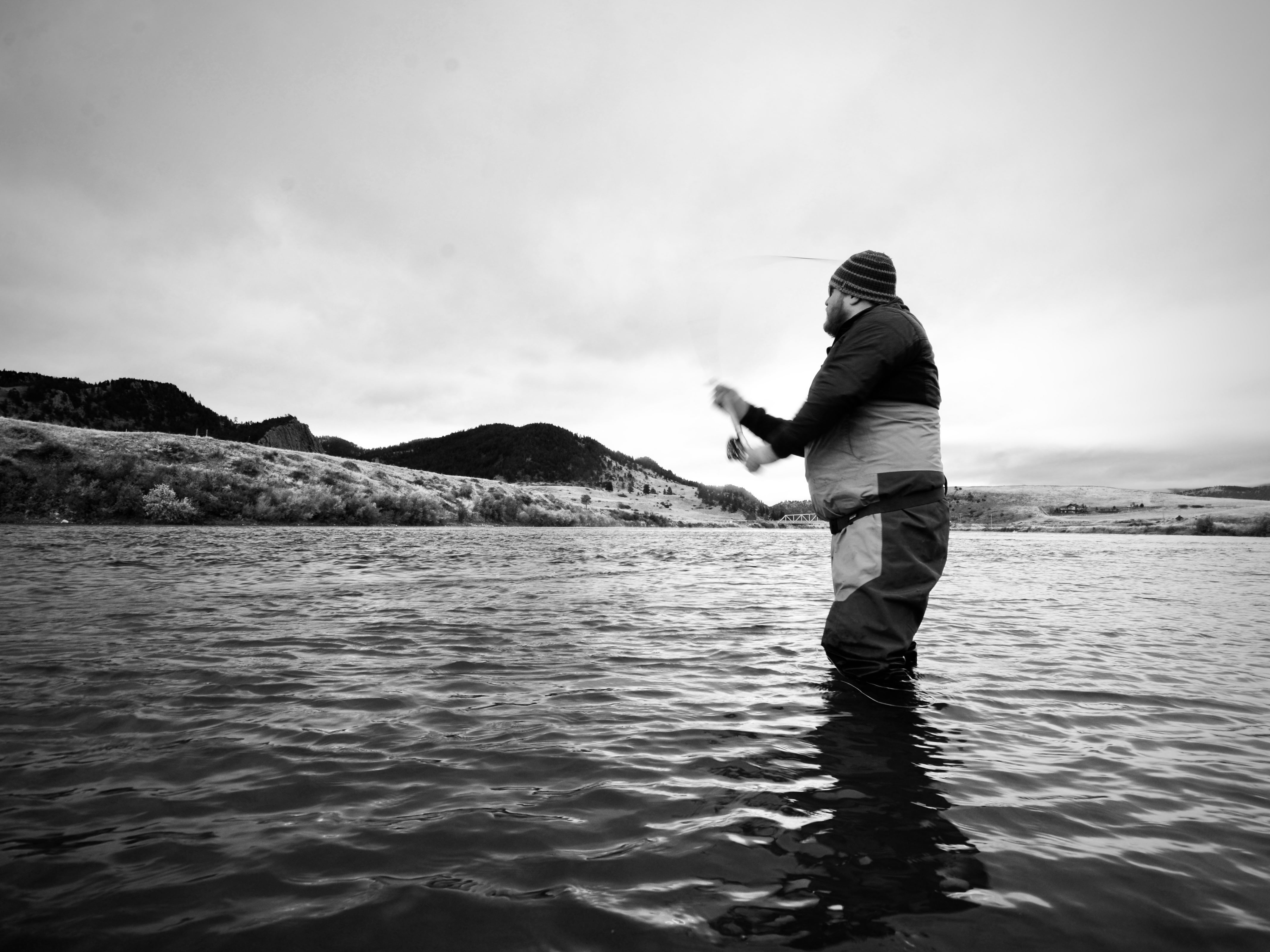 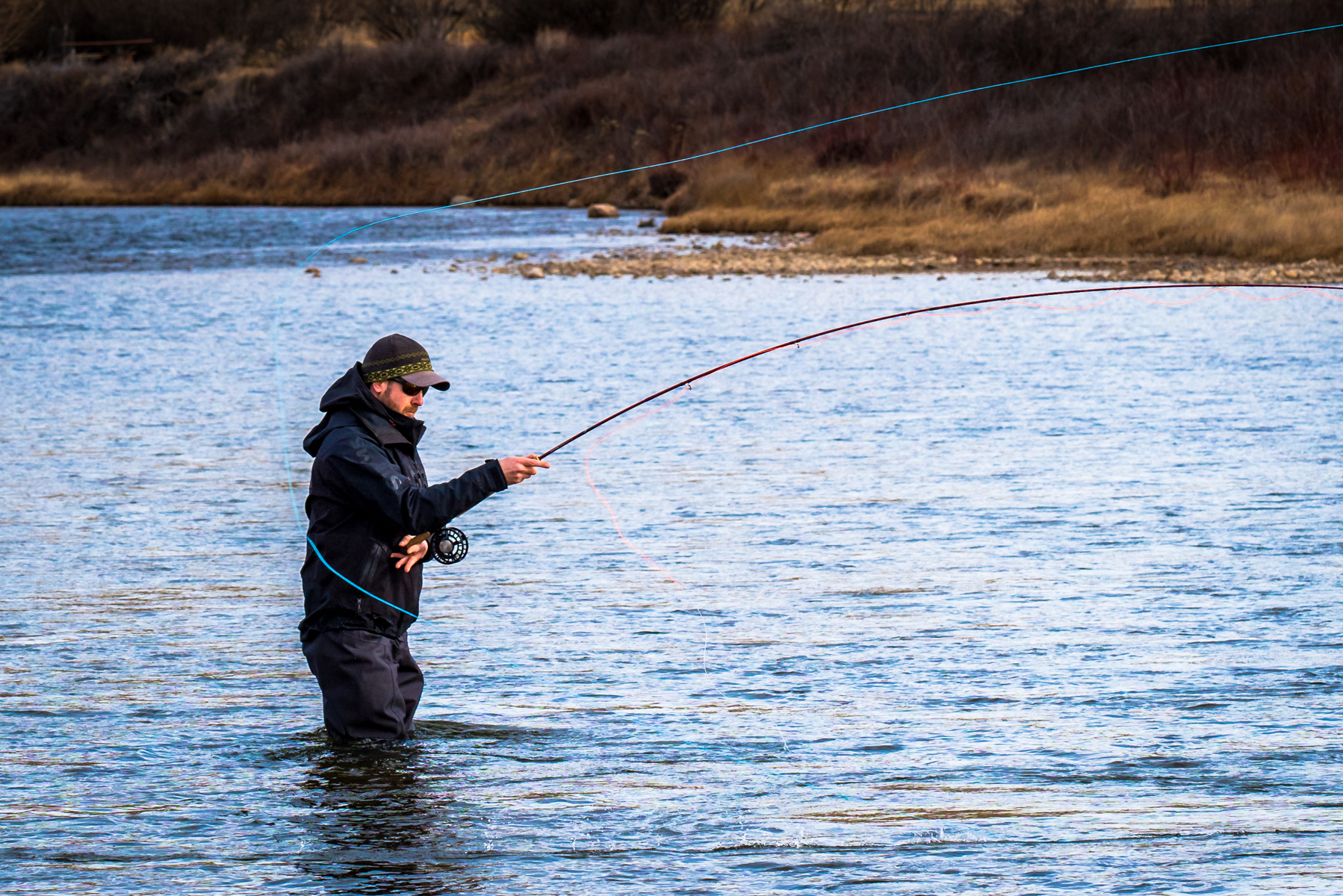 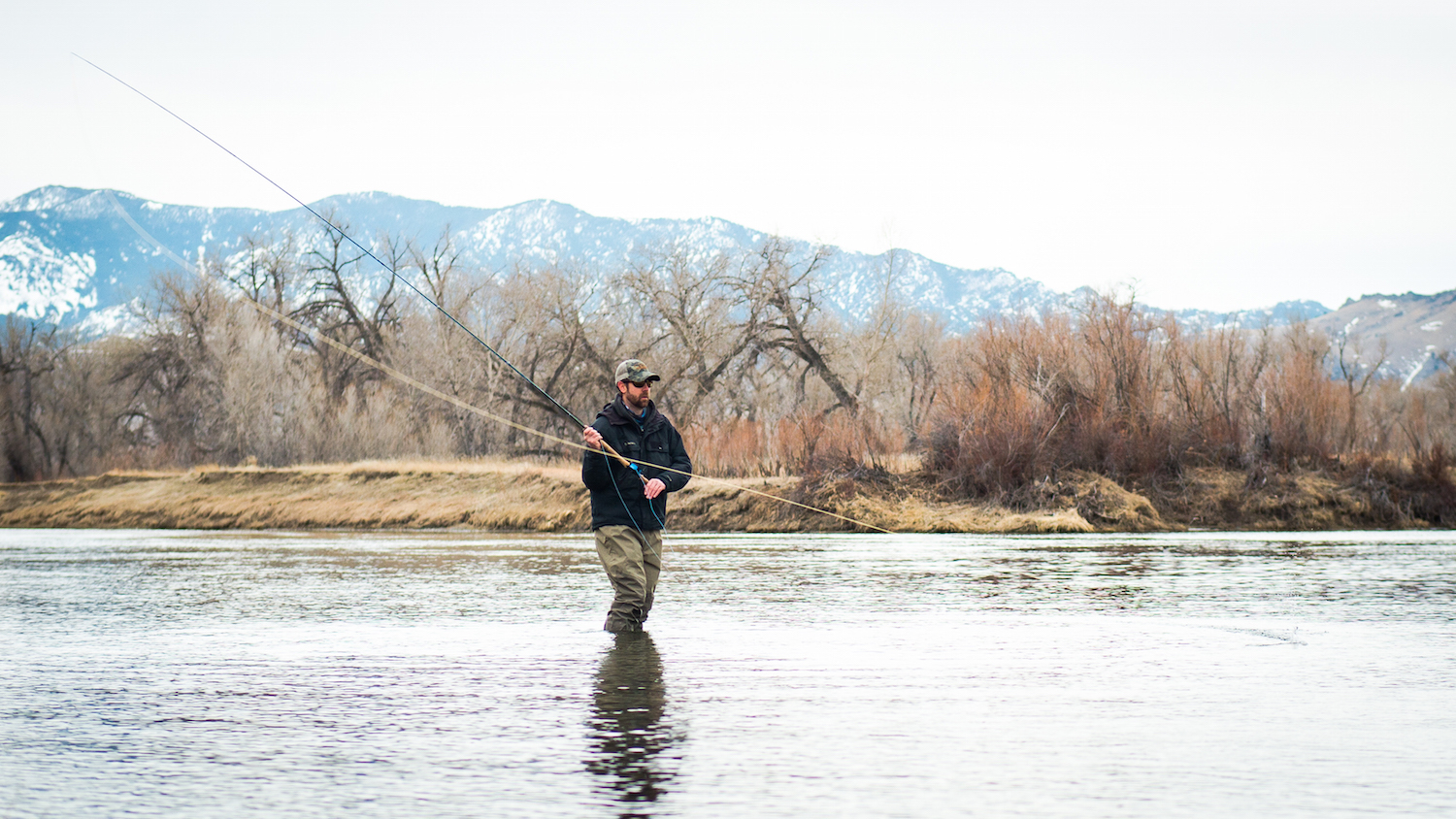